What Can Dirty Harry's .44 Magnum Model 29 Handgun Really Do? 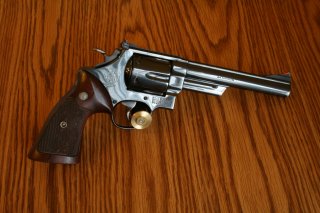 Here's What You Need To Remember: Blued with reddish brown grips and a large, hoodlike ejector housing, the Model 29 has classic look that few other guns do. While not an ideal anti-personnel weapon for anyone but the likes of “Dirty Harry,” the .44 Magnum handgun does fill a niche, satisfying gun enthusiasts, hunters and fictional police detectives alike.

In the first half of the twentieth century, the largest revolver calibers were .45 ACP, used in revolvers such as the M1917 revolver, .45 Colt, a round used in older Colt revolvers, and .44 Special. While all of these bullets exceeded a diameter of .40 inches, they were eclipsed in energy delivered by the .357 Magnum. Although a narrower bullet, the .357 Magnum delivered a very respectable 494 foot pounds of energy, while the .45 ACP delivered 365, the .45 Colt 444, and .44 Special a mere 295 foot pounds. The .44 Special was also significantly slower, at 776 feet per second. All three of the big bore rounds flew at subsonic speeds. The .357 Magnum round, by contrast, broke the sound barrier at 1150 feet per second.

Kyle Mizokami is a defense and national-security writer based in San Francisco who has appeared in the Diplomat, Foreign Policy, War is Boring and the Daily Beast. In 2009, he cofounded the defense and security blog Japan Security Watch. You can follow him on Twitter: @KyleMizokami. (This first appeared two years ago.)