What Can Stop NATO Tanks in Europe? Weak, Older Bridges 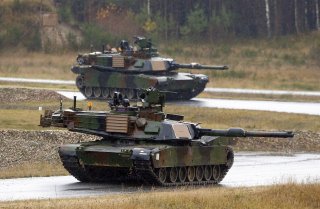 Key point: The Army temporarily deploys one armored brigade at a time to Europe, each on a nine-month rotation. A typical armored brigade has around 90 M-1 tanks and 130 M-2 fighting vehicles plus around 18 M-109 self-propelled howitzers.

And the Army for one is struggling to buy armored bridge layers that can help to mitigate the problem.

The requirement is clear. To deter Russia from attacking Poland and the Baltic States, the Army and its NATO allies should deploy heavy armored forces such as M-1 tanks, armored fighting vehicles, and self-propelled artillery.

The U.S. Army deploys armored bridge layers in order to help tanks cross narrow gaps. But around 200 of the service’s roughly 250 bridge layers are 1970s-vintage AVLBs, which use M-60 tank chassis and are too slow and unreliable to keep up with fast-moving tanks.

The rest are 1990s-vintage Wolverine bridge layers that use the M-1 chassis. The Wolverine is faster but its bridging mechanism is complex. “We found out it was hard to operate and maintain,” Lt. Col. Jeff Biggans, the product manager for Army bridging, told Defense News.

Early tests of the new bridge layer in 2019 found serious flaws. “The issues we found were primarily related to the hydraulic system or training issues,” Steve Rienstra, an Army product manager for bridging, told Defense News.

The company that makes the JAB, Leonardo DRS, has redesigned the new bridge layer. The Army has expressed its confidence that the next round of testing will go better for the JAB. But in the meantime, the service cut $126 million from the program’s projected $200-million budget for 2021.