What Caused the British F-35 Crash? New Information Has Emerged 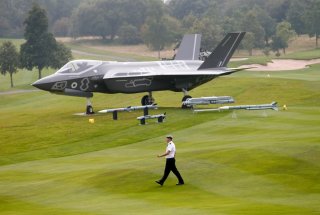 On November 17, a British-flagged F-35 Joint Strike Fighter crashed shortly after takeoff during routine flight operations from the British flag ship carrier, the HMS Queen Elizabeth. Now, leaked footage of the incident shows that the aircraft never even left the deck of the vessel before plummeting off the edge into the water below.

As you can see in the footage, the F-35 is approaching the ramp at end of the carrier’s flight deck when it seems to decelerate at the worst possible time. As it reaches the top of the ramp, it seems to have lost nearly all forward momentum, and the pilot ejects before the fighter tips nose-first into the Pacific.

This leaked footage, apparently captured by a smartphone recording a playback of the carrier’s own closed-circuit camera, seems to substantiate unconfirmed reports that the incident was caused by an inlet or intake cover that wasn’t removed during pre-flight checks. It’s important to note that while this footage appears to be real and does seem to corroborate those reports, neither the footage nor the intake cover claim have been verified by the Royal Navy at the time of publishing this story.

The pilot escaped without serious injuries, but the loss of one of just 24 British F-35s in service marks a significant loss for the Royal Navy amid British discussion of reducing further F-35 orders due to concerns about the jet’s high operating costs.

According to an analysis from the Department of Government Oversight, the F-35B that was lost, which is the short take-off, vertical landing variant of the stealth fighter, is the most expensive of the F-35 family, with a sticker price of just shy of $134 million per airframe.

According to a report in The Sun (which should be taken with a grain of salt), an anonymous source with inside knowledge of the incident said they knew “almost right away” that something was wrong as the F-35 approached the ramp.

“The covers and engine blanks are supposed to be removed before flight. The ground crew do it and they are incredibly strict. Then the pilot walks round,” the anonymous source reportedly explained.

The same source went on to blame the crash of the F-35 on “human oversight.” While as-yet unconfirmed, this recounting of events would explain why no other F-35s were grounded as the investigation into this incident began. If it was not clear from the onset that the crash was caused by human error, it stands to reason the F-35 flight operations aboard the HMS Queen Elizabeth, and potentially even worldwide, would have been put on hold. Neither of which occurred, and flight operations were said to recommence aboard the British carrier shortly after the incident.

F-35s, like practically all military aircraft, use inlet and engine covers as well as safety pins throughout to protect engines and other sensitive components from debris and the weather when in not operation. Safety pins are always put in place for a myriad of reasons, all of which are usually marked with a red tag that says, “remove before flight.”

“On the flightline for Marine Corps jets, it’s called ‘red gear.’ It’s all very easily visible, and it seems like it would be impossible for one to get sucked in because it’s not just a blanket, it’s like a big foam pillow that slides in and blocks the intake,” explained Marine veteran and Sandboxx News editor, Tory Rich. Rich served as a maintainer on the F-35B’s British jump-jet predecessor, the McDonnell Douglas AV-8B Harrier II.

Pre-flight operations for such an aircraft include removing all of these covers and pins, and importantly, also include a series of checks to ensure they’ve all been removed. Ultimately, the pilot of the aircraft conducts a walk-around of the jet to check each of these things for him or herself before climbing aboard for any flight.

“FOD (foreign object debris) is the bane of a maintainer’s existence. Policing for it is instilled in you like weapons safety rules on the rifle range. It’s that same level of paranoia of screwing up and discipline.”

If a rain cover or similar had been left over one of the intakes on the F-35, it could certainly explain the crash. Had the cover been sucked in, it could have caused serious internal damage to the engine, preventing the single-engine fighter from producing enough thrust for takeoff. Likewise, damage to its large lift fan, housed within the fuselage, would also prevent the short-take off F-35B from gaining the altitude it needs.

“It just becomes a part of you to always check for FOD on the flightline. There are so many checks and balances to make sure nothing like this ever happens, that it is hard to believe when you hear about it,” Rich said.

The problems may extend beyond the loss of one F-35

Unfortunately, the Royal Navy’s woes may not end with the loss of a single F-35, and in fact, efforts are currently underway to minimize potential damage to the F-35 program at large as a result of this crash.

Because the F-35 dropped directly off the front of the ramp, there’s potential that it could have struck the bow of the ship. While this wouldn’t pose a serious threat to the 65,000 ton HMS Queen Elizabeth, it could still have caused some expensive damage.

“Given how close the aircraft ditched to the bow, and the speed of the ship on launch, the likelihood of it hitting the bow of the ship (under the waterline) would be quite high,” Commander Tom Sharpe, a former Royal Navy officer, told Sky News.

“Warship steel is not that thick so, even despite the weight discrepancy between the two, I would want the compartments near the bow checked immediately… I would then want the hull dived on at the first opportunity, just to be sure.”

The Royal Navy has reportedly stated that they don’t believe any damage to the ship occurred, but that they intend to conduct a thorough check once the vessel’s deployment is over to be certain.

The other lasting concern among the speculative online masses is the potential for Russian submarines to locate and capture the sunken airframe for the purposes of reverse-engineering and tactical analysis. While no nation has stated such a concern, it’s almost certain that a recovery effort is underway, with the U.S. taking the lead, as the British Navy lacks the equipment for such an endeavor.

Could Russia be attempting to do the same? It’s hard to say, and to be clear, it’s not even certain Russia would have the means to do so even if they were perfectly positioned for it. But it is, nonetheless, a clear possibility.