What Did The Air Force Learn From Boeing's Experimental Blended Wing Body Aircraft? 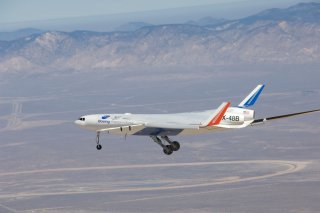 Boeing’s X-48 is an unmanned aerial vehicle that was jointly developed by NASA and Boeing’s Phantom Works, a division similar to Lockheed Martin’s Skunkworks. Though small, the design was intended to explore commercial options for a blended wing-body design.

The X-48 project “stems from concept studies being conducted by NASA’s Environmentally Responsible Aviation project of future potential aircraft designs 20 years from now,” and investigated the future of commercial aviation.

Both Boeing and NASA’s goals were “reduced fuel burn, emissions and noise,” which would be accomplished via “a unique merger of efficient advanced wings and a wide airfoil-shaped body, causing the aircraft to generate lift-to-drag ratios, thereby increasing fuel economy,” according to NASA informational releases.

There are several theoretical advantages to a blended wing body design. Structurally, the design is stronger, since the wing’s contact with the fuselage runs virtually the entire length of the plane, rather than only in the center of the aircraft, like in traditional commercial airliners.

Due to the large internal volume inherent in a blended wing body, a greater amount of fuel, passengers, and cargo can be stored in the plane, giving the design a capacity advantage. The blended wing body design is also more aerodynamically efficient, potentially lowering carbon emissions and increasing fuel economy.

The stingray-shaped technology demonstrator flew a total of 122 flights, most of them under an hour long. The X-48 had two slightly different prototypes, the X-48B and X-48C.

The X-48B had three compact jet engines, each producing 50 pounds of thrust. Although it did not have a tail, winglets on the swept-back wings effectively acted as wings.

The X-48C, on the other hand, had just two slightly larger engines that produced 89 pounds of thrust each. Rather than winglets, the X-48C had a tail assembly with two small control surfaces at the rear. Its wingspan was slightly longer. It weighed around 500 pounds and had a top speed of 140 miles per hour. The maximum altitude was reportedly 10,000 feet, or about 3,000 meters.

Still, there are several engineering challenges that would need to be addressed. There would be more passengers, making emergency evacuation difficult, as passengers would be father away from the exits than in a tubular-style fuselage.

Some passengers may also not want to sit in the center of the plane, farther away from the windows. Conversely, passengers with window seats may experience more motion sickness during turbulence or normal flight operations as they would be farther from the plane’s center of gravity.

Boeing’s VP of Product Development and Future Airplane Development detailed one of the important disadvantages of the blended design, saying that cargo planes need to be able to be quickly loaded.

Airports today are equipped for traditional airlines, and making the switch to large, high capacity jets, may take some time yet. For now, no blended wings.