What Does a Massive War Game Between F-35s Look Like? 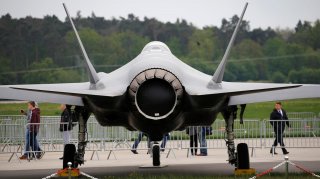 Here's What You Need To Remember: The Red Flag war games are an opportunity for pilots to get some real-life dogfighting experience.

Red Flag 20-1 took place between Jan. 27 and Feb. 15, 2020 around Nellis Air Force Base near Las Vega, Nevada. The Utah-based 388th Fighter Wing, an F-35 unit with three front-line squadrons, served as the “core wing” for Red Flag 20-1, meaning its personnel helped support aircraft from other units that participated in the exercise.

The Air Force stood up Red Flag in 1975 in response to what it considered unacceptable pilot losses over Vietnam. Noting that pilots face the steepest learning curve during their first 10 combat missions, the Air Force decided it was best to simulate those initial and most dangerous missions in a realistic exercise.

“We are the newest squadron, with the least amount of experience, who stood up the fastest,” Lt. Col. Richard Orzechowski, commander of the 421st Fighter Squadron, told an Air Force reporter.  “We have a fairly high ratio of pilots with limited F-35 experience, including some who have never flown another platform. Flying in a large force exercise is a valuable learning experience for them.”

“They have about a 10-hour mission planning day,” Orzechowski said of his pilots. “They sit down with all the other assets and figure out how to best tackle the mission scenario. The mission execution day is about 15 hours, with briefings and debriefings following the mission.”

The Royal Air Force, which participates in most Red Flags, deployed to Red Flag 20-1 a large contingent of planes and personnel including, for the first time, F-35B jump jets. The RAF also sent Typhoon FGR. 4 fighters and a Voyager KC3 tanker.

The tanker refueled British planes as well as the F/A-18F Super Hornets and EA-18G Growlers that the Australian air force sent to Red Flag 20-1.

“The training you get here is really peerless,” Squadron Leader Andy Milikin, commander of 41  Test & Evaluation Squadron said of Red Flag. 41 TES sent its Typhoons to Nellis for the war game. “To be able to operate with the Voyager, with F-35 and the deployed support unit brings us together in a way that you cannot do when you’re at your own base in the U.K. Coming to Nellis to take part in Red Flag gives you the best real-world training without actually going to war.”

“We’ve got a huge expanse of air space in which we can fly,” Milikin added. “The threats which the Americans provide are highly realistic and you really can’t go anywhere else in the world other than to come out to Las Vegas to get this sort of training.”

Red Flag in the coming years could become even more realistic and, for pilots, more difficult. With Russia and Chinese air forces both deploying their own stealth fighters, the U.S. Air Force has asked Congress to allow it to modify a small number of early-model F-35As to fly as aggressors alongside the older, non-stealthy F-16s.

Lawmakers as part of the 2020 federal budget put the plan on hold. The Air Force still could get its stealthy aggressors, but Air Force chief of staff Gen. David Goldfein first must submit a report to lawmakers explaining how the flying branch will modernize the aggressor F-16s.