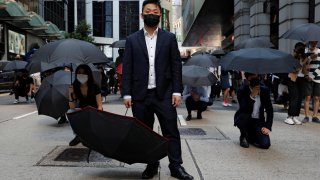 With escalating U.S.-China tensions, it is critical to reconsider the future of financial markets in Asia, recognizing Hong Kong as the most important victim of China’s corporate cold war with the West. What happens next for Hong Kong’s financial assets could redefine the course of economic history. The continued dominance of liberal democracies in the global financial system hangs in the balance.

Amid major global turmoil, China is continuing to tighten its grip on Hong Kong, most recently with the imposition of its security law in June, a major act of defiance, and a death knell for Hong Kong’s relationship with the West as a bridge to Asia.

For years, the status quo in Hong Kong, the most important financial center in Asia, has been a high degree of freedom, transparency, stable governance, and efficient regulators—all of which created favorable conditions for businesses to operate with confidence in the fairness and fungibility of its markets.

This advantage, along with strategic placement and strong infrastructure, allowed Hong Kong to develop one of the highest concentrations of banking institutions in the world, with net external financial assets in the city totaling more than $12 trillion. China’s assertion of influence is a calculated step to gain greater influence over financial markets and so to tip the scale of economic and geopolitical dominance further in its favor.

China’s actions will not come without consequences: A steady outflow of investment is a near certainty—22 percent of firms in Hong Kong are considering moving their capital out of the SAR according to a survey from Singapore’s American Chamber of Commerce—and Chinese firms (along with everyone else) will face a significant hike in cost of capital.

Yet China’s actions will also eventually bring a capital market worth trillions to heel, shoring up its ability to leverage foreign investors into submitting to its anticompetitive will.

China recognizes that establishing regional and global dominance in its financial markets is the last step in cementing its ascension as a superpower. This recognition is embodied in some of its recent liberalizations, including opening its doors to foreign investment banks and its focus on the development of Shenzhen and Shanghai as leading financial hubs.

Investors have been rightfully wary of fully embracing China, as such a move would come with a slew of uncomfortable conditions, including price manipulation, weak disclosure standards and enforcement, intellectual property theft, and aggressive enforcement of its Anti-Monopoly Law. China has a demonstrated history of casting off its liberal veil whenever it is convenient to do so. That’s why foreign investors have largely opted to enter China’s markets via Hong Kong.

China surely recognizes that bringing “one country, two systems” into doubt will be harmful in the short term, and that Hong Kong’s mainline access to the West’s financial pipeline would never happen organically within its own borders. But it’s clear from China’s track record—which includes currency manipulation and destroying housing to prepare for the Olympics, among other offenses—that China is more than willing to accept short-term costs and harm its own citizens for the purpose of advancing its long-term goals. In this case, China gains a major tool in imposing its industrial policy on the West.

The EU, UK, and United States have so far responded firmly in addressing China’s oversteps in Hong Kong. The UK opened its doors to as many as three million Hong Kongers, and the United States and EU recently announced sanctions. Going forward, however, Western countries must divert financial assets and supply chains out of China.

Both Tokyo and Singapore are good candidates for increased financial investment, with both seeking to take advantage of the uncertainty by the introduction of incentives and tax efficient corporate vehicles to lure in foreign investment most notably with Singapore’s Variable Capital Company—a flexible and tax efficient corporate structure built specifically to target asset managers.

With Hong Kong’s special status in question, the United States, EU, and UK should consider shifting the special privileges once afforded to Hong Kong to Singapore and Tokyo, while building stronger relationships with both, including greater cooperation between each respective central bank to create incentives for investment and cooperation.

Finally, the United States and its allies should cooperate in remaking supply chains and curtailing Chinese influence in infrastructure and manufacturing, the former of which Bank of America estimates costs at $1 trillion, a cost which has become increasingly necessary as corporate shareholders have become painfully aware of the vulnerability of their global supply chains amid the pandemic.

Going forward, democratic leaders should seek to compete and curtail China’s influence, creating a firm boundary for China’s expansionary ambitions, and taking a united stand in protecting the future of liberal democratic values in the global economy.