This Is What Happens When a U.S. Navy Submarine Hits an Underwater Mountain 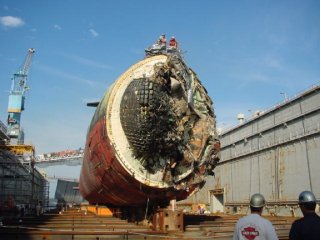 Here's What You Need to Remember: In the aftermath of the investigation, the Navy found that the submarine had been using outdated charts that described the area where the grounding happened as “discolored water,” indicating likely seamounts in the area.

In 2005, a U.S. Navy nuclear submarine ran aground on a mountain. No, it wasn’t out of the water—it hit an underground mountain, and nearly sank.

The USS San Francisco is an American nuclear-powered submarine, one of the large Los Angeles-class submarines first laid down in 1972 and are among the U.S. Navy’s top submarines, albeit not as modern as newer Seawolf or Virginia-class submarines.

The grounding was massive. Sailors in the dining room were tossed up to twenty-five feet across the mess-hall. One of the sub’s Petty Officers, Brian Barnes, recalled the incident during an interview with 60 minutes. “I remember just bodies everywhere,” he said. “Broken glass, stepping on plates, your shipmates moaning because they’re in pain, yelling.”

The bow of the USS San Francisco was shattered, the frontal thirty feet or so were crushed and exposed to the sea. Water was rushing into the sub—it was critical that an emergency blow be initiated in which air is pumped into the submarines ballast tanks to bring it up to the surface.

The San Francisco’s normal complement was 127 souls, 12 officers and 115 men. 98 suffered injuries during the collision and many of which were unable to man their stations due to their injuries. One sailor, Machinist’s Mate Second Class Joseph Allen Ashely would later die of a head injury.

The sailor who opened the submarines air valves to fill the ballast tanks—the emergency blow—did so with two broken arms.

Eventually the USS San Francisco bobbed to the surface, but the journey home was not complete. Luckily the nuclear reactor hadn’t been damaged in the grounding, and the crew limped homeward at a slow ten miles per hour, taking them fifty-two hours to get to Guam.

Despite it’s awesome firepower and nuclear propulsion, the USS San Francisco, like all submarines, was dependent on sea charts that map out the seafloor below. In the aftermath of the investigation, the Navy found that the submarine had been using outdated charts that described the area where the grounding happened as “discolored water,” indicating likely seamounts in the area.

Caleb Larson is a defense writer for the National Interest. He holds a Master of Public Policy and covers U.S. and Russian security, European defense issues, and German politics and culture. This article first appeared earlier this year and is bineg republished due to reader interest.