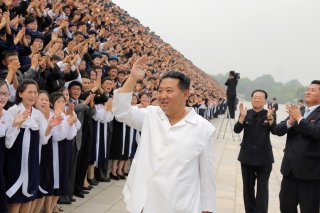 Here's What You Need to Remember: Making strategy for an increasingly heterodox epoch—an epoch when more and more societies sport the ultimate weapon and think differently about how to brandish it—represents a trying task. Indeed, it could prove more trying than Cold War strategy-making from yesteryear.

It appears the fat kid in Pyongyang has backed off his threat to rain missiles on Guam. Still, one can only say: welcome to the second nuclear age. You can check out any time you like, but you can never leave—no matter how many treaties nonnuclear states negotiate purporting to ban the ultimate weapon. Sage leaders must adjust policies and strategies to accommodate this brave new world—the world as it actually exists, in other words—rather than base their deliberations on fantasies of a nuclear-free world.

The first nuclear age was a terrifying time. Any erstwhile schoolkid who had to duck and cover will tell you that, as will any news consumer who saw nuclear blast radii blazoned on the map of his hometown on the front page of the daily newspaper—projecting likely casualties from an atomic strike. In retrospect, though, it was a time that had its upsides. Arsenals were colossal in numbers and destructive might relative to today’s modest forces. Yet the circle of nuclear-weapon states remained compact, capped at five by the Nuclear Nonproliferation Treaty of 1970. That simplified the geometry of nuclear strategy and deterrence, especially since the nuclear club broke down into two roughly symmetrical caucuses hailing from European civilization and thus sharing similar assumptions about the worldwide. Yes, that Mao guy was a problem. That’s why both sides, including the Soviet Union, considered strangling the Chinese nuclear complex in its infancy. But whatever his legion of faults, the Great Helmsman hewed to nuclear minimalism. Only in recent years, decades after his passing, has China commenced a major upgrade to its deterrent forces.

Bottom line, atomic deterrence was a straightforward matter in yesteryear: the Soviet Union counterbalanced the NATO allies and vice versa, while the outlier nuclear-weapon state, China, maintained a humble arsenal while foreswearing first use of it. Now, there were some hairy times during the Cold War, to be sure. Folk of an age to remember the Cuban Missile Crisis shake their heads when that long-ago imbroglio comes up in conversation. In retrospect, though, the Caribbean crisis prodded the contestants to sort out rules for the deterrence game. East and West could compete without wrecking civilization. Nor was atomic competition quite that neat. Israel built an undeclared arsenal, India executed a “peaceful nuclear explosion” long before its 1998 nuclear breakout, and even apartheid South Africa constructed a few tactical nukes. A. Q. Khan trafficked the makings of nuclear weaponry on the gray market. Still, the logic of mutual assured destruction imparted a measure of predictability to Cold War strategy and policy.

No more. More and more countries have joined the atomic club for the second nuclear age. No longer are contestants symmetrical in worldviews or physical potential. New entrants come in a variety of shapes and sizes, and they hail mainly from non-Western civilizations. And they respond to different incentives. Some might see value in doomsday weaponry not just for deterrence but for battlefield use. All of this puts the assumption that states are rational actors under stress. Every time a new actor develops atomic weaponry, the international community debates whether it subscribes to the logic of mutual assured destruction or if that actor might actually use its bombs in combat. No one has to date, mercifully, but their forbearance might be one of those trends that holds until it doesn’t.

The rational-actor assumption underlying economic and international-relations theories is flimsy in any case. Philosophers maintain, rightly, that powerful passions impel human actions. Political and military leaders do not simply compile a ledger of costs and benefits, weigh the one against the other dispassionately, and reach a decision. Other forces are at work, and at times they overpower cost/benefit calculations. Thucydides points to fear and honor as well as seemingly objective reckoning of self-interest. Scottish Enlightenment thinker David Hume agrees that both rational and not-strictly-rational motives constitute prime movers for human thought and deeds. Longshoreman philosopher Eric Hoffer goes Thucydides and Hume one further, contending that “extravagant hope” animates “true believers”—and that true believers draw strength and resolve precisely from disregarding objective reality. Couple powerful nonrational motives with nightmarish weapons and the outlook for the second nuclear age seems bleak indeed.

Nor should discomfiture stop with sizing up the gatecrashers to the current order. As newcomers fit out nuclear inventories and contemplate how to use them, oldtimers from the first nuclear age—gatekeepers, as it were—appear conflicted about their own stockpiles. NATO nuclear states France and Great Britain are undergoing partial nuclear disarmament, in part because of sincere commitment to disarmament, in part because of the sheer cost of replenishing aging weapons and delivery systems. Fielding adequate numbers of nuclear-powered ballistic-missile submarines (SSBNs) represents a particular worry. Russia is struggling to renew its own arsenal, fettered by economic distress. Even America is replacing large numbers of creaky older weapons with fewer—albeit better—ones. During the 1990s, for instance, the U.S. Navy converted four of its Cold War-vintage Ohio-class SSBNs to fire conventional cruise missiles. The leadership intends to replace the remaining fourteen boats with twelve newfangled Columbia-class SSBNs, each of which will carry fewer submarine-launched ballistic missiles than an Ohio.

In short, gatekeepers of the first nuclear age—the five nuclear-weapon states codified by the Nonproliferation Treaty—are struggling with how to cope with gatecrashers such as North Korea and Iran. Oldtimers are trying to manage new entrants at the same time they’re reducing their margin of atomic supremacy—and thus, potentially, their capacity to deter the Kim Jong-uns or Ayatollah Khameneis of the world. In the case of Northeast Asia, furthermore, the new normal has brought U.S. alliances under strain. America has hoisted its protective nuclear aegis over the region since the inception of the first nuclear age. But allies such as South Korea and Japan may come to question the durability of “extended deterrence.” If an erratic Kim can strike directly at American soil, would Washington trade, say, Honolulu for Seoul or Tokyo?

Such questions must haunt Asian minds. And there’s a conventional-warfare dimension to the nuclear problem. The U.S. force posture in Asia appears increasingly tenuous owing to Chinese, Russian and Iranian anti-access/area-denial strategies and weaponry. It remains to be seen how credible allies would find American nuclear security guarantees if U.S. conventional forces could no longer count on access to the region, and thus to the allied bases that comprise America’s strategic position in Asia. If the United States could no longer defend partners through nonnuclear means, what then? Allies might justifiably question whether Washington would protect them if the nuclear option were the only option open to U.S. political leaders. In short, anti-access could hollow out U.S. nuclear deterrence—and thus the longstanding U.S. alliance system that buoys American strategy in the region. Seoul or Tokyo might develop freestanding arsenals rather than rely on unreliable American guarantees. They might even bandwagon with the Chinas or Russias of the Far East if they saw no other recourse. The United States would lose either way.

Making strategy for an increasingly heterodox epoch—an epoch when more and more societies sport the ultimate weapon and think differently about how to brandish it—thus represents a trying task. Indeed, it could prove more trying than Cold War strategy-making from yesteryear. One hopes American and allied strategists are mulling these larger trends rather than stepping in the briar patch of obsessing over who has what weapon at the moment and who threatened whom today. Better to think about the unthinkable now than when the unthinkable takes place.