What if America Sold B-52 Bombers To Israel? 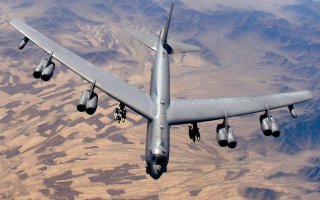 Here's What You Need to Know: It would be dumb for Washington to offer B-52s.

In April 2014, retired Air Force lieutenant general David Deptula and Michael Makovsky of the Jewish Institute for National Security Affairs penned an op-ed for The Wall Street Journal arguing that the United States should turn over a dozen surplus B-52 heavy bombers to Israel.

“B-52s for Israel,” as we’ve dubbed it, is a silly little proposal with approximately zero chance of actually being implemented. And it’s possible Deptula and Makovsky don’t even mean for anyone to take its details seriously.

Their bomber idea could be part of a media game of sorts, one that certain political constituencies are playing in order to broadly influencepolicy, rather than comprise policy.

But just for fun, let’s consider “B-52s for Israel” as a sober proposal.

MOP is a precision-guided gravity bomb. So a B-52 cannot deploy it from standoff range. The bomber has to get close to the target.

The B-52 is slow. This is why you don’t normally fly the giant warplane through contested air space. In 1972, the North Vietnamese shot down a staggering 16 B-52s in 11 days during Operation Linebacker II.

The Iranian air force flies hundreds of MiG-29s, F-7s, F-4s and F-5s and a couple squadrons of U.S.-made F-14s, pictured, that might still wield a version of the long-range Phoenix missile. Any of these jets could intercept Israeli B-52s.

Iran also has a relatively sophisticated integrated air defense system with large numbers of surface-to-air missiles. They, too, could prove devastating to attacking bombers.

If you’re the sort of country that can carry out a massive defense-suppression campaign in advance to destroy air bases and surface-to-air missiles along the bombers’ route, then you can manage this problem. Or you can just send a radar-evading B-2.

But that’s America we’re referring to. Israel is no slouch when it comes to executing complex air raids against heavily-armed foes. But the Jewish state lacks the capacity for an expansive defense-suppression campaign, the likes of which might ensure the B-52s’ survival as they lumbered in to drop their MOPs.

In the recent past, Israel has sent speedy F-15s and F-16s on small, lightning-quick raids through largely intact air defenses in order to destroy Iraqi and Syrian nuclear facilities. The strategic wisdom of such raids is debatable; their military effectiveness is not.

Far from improving Tel Aviv’s ability hold at risk Tehran’s nuclear program, “B-52s for Israel” actually makes a successful pinpoint raid more difficult and expensive by requiring the Israeli air force to destroy essentially all of Iran’s defenses before the bombers can deliver their decisive ordnance.

This is to say nothing, of course, of the problems the Israelis would face in developing sufficient expertise to fix and fly the 1960s-vintage B-52s. The bombers cost a lot to maintain compared to F-15s and F-16s. The Israelis retired their last large, multi-engine bombers—B-17s—in 1958. Since then, Tel Aviv has built its air power around small fighter-bombers.

Essentially, Deptula and Makovsky are asking the Israelis to use B-52s in circumstances more dangerous than the U.S. Air Force itself has been willing to use them since at least 1991, and probably since 1972.

What about the politics? Giving bombers to Israel would save the U.S. the time and trouble of destroying the Iranian nuke program itself, presumably leading to more credible deterrence, right? In fact, it’s doubtful exporting the B-52 would actually save the United States any trouble.

It’s tough to imagine any aircraft more symbolic of American empire than the B-52. The huge warplanes have flown for the U.S. Air Force since 1952—and never for any other country. The B-52 is more quintessentially American than the F-15, also flown by Saudi Arabia, and the F-16, which Egypt, Jordan and soon Iraq also operate.

Working through the logic—or lack thereof—behind the proposal, it’s easier to grant that Deptula and Makovsky are making a political rather than a tactical point.

However, one of the reasons for creating an independent air force is to develop a cadre of experienced, professional air power experts. These experts are supposed to do two things.

First, they manage military air power in the most efficient and effective way possible. Second, they provide expert advice to civilian policymakers and to the public with respect to how the military can utilize air power to accomplish national objectives.

This second role means that both active-duty and retired U.S. Air Force officers have a responsibility not to spout nonsense about air power in public forums. The patina of professional expertise could lead civilian policymakers and the public at large to take this nonsense seriously.

If the Air Force cannot either sufficiently educate its officers such that they appreciate the consequences of the tactical and operational advice they are providing to civilians—or at least inculcate a sense of responsibility with respect to their professional obligations as managers of air power violence—then maybe we’re better off without an air force.

This article first appeared on WarIsBoring in April 2014.