What if Russia's T-14 Armata Tank Isn't All It's Cracked up To Be? 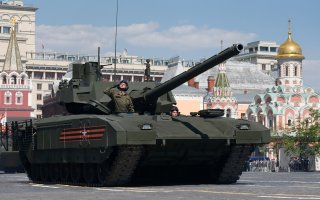 Here's What You Need to Know: Concerns about the threat posed by the T-14 Armata are informing U.S. tank and weapons developers.

The Russians are beginning to offer foreign sales of the well-known and highly-touted T-14 Armata tank, a move which introduces new questions about the extent of Russian alliances, the tank’s technical sophistication and, perhaps of greatest significance, its potential threat to the United States and its partner militaries.

“Russian producers are ready to offer potential buyers both air defense systems, such as the S-300 and the S-400, and advanced aircraft and helicopters. We are preparing the MiG-35 light fighter for sale and are promoting the latest T-14 ‘Armata’ tank,” the Russian defense official said, according to a report from TASS, a Russian News Agency.

The report says Russia plans to start work with foreign customers next year and has already received several requests.

The forty-eight-ton modern T-14 tank is widely reported to be able to reach speeds of ninety-kilometers per hour. Additionally, it is built with an unmanned turret, without a “fume extractor” and is designed for a three-man crew surrounded by an armored capsule.

Much has been made of the T-14 Armata’s cutting edge technology, including its active protection, twelve-round per minute firing rage and 125mm smoothbore cannon in numerous public reports and assessments. However, it is not at all clear that the T-14 in any way fully outmatches current and future variants of the Abrams tank—at least according to available public information.

Nonetheless, while not discussed much by U.S. tank developers, Abrams modernization efforts are without question being designed to meet and exceed any dangers posed by rival nations’ tanks, such as the T-14.

Concerns about the threat posed by the T-14 Armata are informing U.S. tank and weapons developers. At the same time, the Russians simply have not built enough T-14s to present what might be considered an extremely serious and credible threat.

A report in Popular Mechanics from several years ago, says the T-14s new, now-in-development 3UBK21 Sprinter missile can hit ranges more than seven miles, basically tripling the current 2.48-mile range of an Abrams 120mm round.

The Armata’s current round, the 9M119 Reflecks, has a range of 3.1 miles (roughly comparable to the current Abrams) and can penetrate up to 900 millimeters of armor, Popular Mechanics writes.

At roughly fifty-tons, the Russian T-14 is lighter and, therefore, potentially more mobile than the Abrams. However, it is not 100% sure if it is comparable in terms of survivability. Certainly, the concept of building a lighter-weight heavy armored vehicle able to cross bridges and keep pace with advancing armored units is ideal for any country.

Furthermore, the advanced electronics reported to be contained in the Armata may parallel current Abrams modernization efforts.

It would seem self-evident that U.S. technical advances are likely to match if not exceed the technical sophistication of the Armata’s unmanned turret, given the pace of progress with AI, computer processing speed and automation.

If the Armata can really reach speeds of ninety kilometers per hour, that does make it much faster than an Abrams, which maxes out at roughly fifty-five miles per hour.

However, the U.S. Army is pursuing a new engineering strategy for its emerging Next Generation Combat Vehicle, which includes increased maneuverability, speed, and an expeditionary focus. Also, expect to see AI-enabled sensor fusion and next-generation Active Protection Systems.

What all of this amounts to is that, despite much of the writing about the T-14, there are many reasons to question the claim that it might be able to outmatch a modernized Abrams or the Army’s emerging fleet of new armored vehicles.