What If the U.S. Builds Its Own 'Great Wall' Against China? 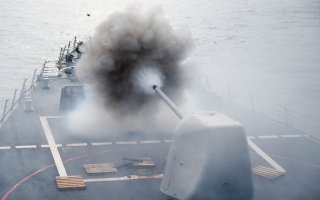 Here's What You Need to Know: Peering through a glass darkly now may help the allies discern what the red team may do.

Suppose the United States and its allies erect a “Great Wall in reverse,” deploying anti-ship, anti-aircraft, and anti-submarine armaments on and around the islands constituting the first island chain.

China’s People’s Liberation Army (PLA) will not submit meekly while the allies curb its freedom of movement between its home waters and the Western Pacific. Instead, PLA soldiers, sailors, and aviators will try to puncture, outflank, or otherwise nullify the wall, regaining access to the wider world. They must—lest China forfeit the export and import trade that underwrites its “dream” of prosperity and national dignity, not to mention its capacity to project military might outside its immediate environs. But how?

Peering through a glass darkly now may help the allies discern what the red team may do. In turn, foresight may help them get ahead in the inevitable next round of strategic competition, devising countermeasures to defeat PLA efforts to defeat the wall. And on and on the competition will go.

Impelling a Great Wall strategy is the notion that the allies must reply to the challenge manifest in China’s theater-wide “anti-access/area-denial” defenses, which aim to make things tough on U.S. and allied forces seeking entry to embattled Western Pacific waters, skies, or landmasses. China has essayed access-denial on a grand geographic scale, hoping to ward off U.S. reinforcements dashing to the relief of Taiwan, Japan, or some other Asian friend. Rigging barricades across short, defensible narrow seas would remind Beijing that access-denial is not just a Chinese thing. The allies can contest access as well, and they can make geography their ally in a way China cannot.

It’s far easier and cheaper to plug a strait, preventing a Chinese ship from exiting the China seas or returning from beyond, than it is to detect, track, and target a U.S. warship traversing the trackless plain that is the Pacific Ocean. Advantage: America.

That island-chain defense is taking hold within Pentagon circles is palpable even as U.S. military strategy recesses more and more into the hush-hush realm of classified intelligence. Just study acquisition patterns along with the guarded words military potentates and their political masters do utter in public. The U.S. Marine Corps is acquiring truck-mounted launchers capable of lofting anti-ship missiles seaward. Likewise is the U.S. Army. The U.S. Air Force has practiced fitting its bombers with precision-guided sea mines. The U.S. Navy is experimenting with unmanned undersea vehicles optimal for lurking in narrow seas to find or pummel hostile shipping from beneath. Etc.

Yet the PLA will not cower before an allied Great Wall, no matter how formidable. How will Beijing seek to win? By harnessing diplomatic, economic, and military implements throughout the continuum from peacetime strategic competition to armed strife and back again. There’s more to access-denial than weapons, sensors, and computers. It is a variety of grand strategy aimed at deterring an adversary from entering geographic space the access-denier places off-limits, retarding that adversary’s advance into contested space should deterrence fail, or barring entry altogether in the ideal case.

What countermoves are available to Beijing as it surveys an increasingly solid first island chain? In peacetime, it can attempt to corrode or fracture the chain through deft grand strategy. China commands advantages in wealth, geographic proximity, and sheer permanence. Asian capitals covet good trade relations with China. Trade lifts all boats, helping countries prosper. At the same time, Asians are acutely conscious that Big Brother lies just over the horizon and increasingly brandishes a big stick. America may come and go from the Western Pacific; China is forever. Its status as Asia’s central power lets Beijing combine economic inducements with diplomatic outreach, friendly or coercive.

The goal of Chinese diplomacy is to convince neighbors to withhold support from U.S. military strategy. An island-chain defense can accomplish little if Asian allies refuse U.S. forces access to their soil. That’s why Xi Jinping & Co. have wooed Philippine president Rodrigo Duterte with such fervor. Beijing can open a breach in the maritime Great Wall without firing a shot if Duterte closes Philippine territory to U.S. forces for the sake of trade and comity with China. Alliance-breaking represents Beijing’s best option in peacetime—and it’s an option that comes naturally, consonant as it is with Chinese strategic traditions.

Still, China’s adventures in dealmaking could fall flat. The U.S.-led alliance system could hold, and martial strife ensue. What then? Rather than project-specific scenarios whereby the PLA might attempt a breakout, let’s look at factors likely to shape China’s wall-busting strategy. First of all, this is a classic case of perimeter defense. In this case, the perimeter is made up of fixed points—namely the islands—and the waters and military implements between.

Like other martial sages, Carl von Clausewitz is no fan of perimeter defense. In fact, he pronounces it a “ruinous form” of “cordon-warfare.” That’s a cutting indictment. However strong the defending force may be, it must spread out in a vain effort to make the line impenetrable. Forces that aspire to be strong everywhere tend to accomplish little anywhere. In other words, parceling out defenders along a distended perimeter thins out the combat power available at any single point. A feeble but astute foe could mass its forces at one point and punch through.

Clausewitz offers a partial remedy if cordon warfare is unavoidable. He exhorts commanders to keep their defensive lines short, refusing to attenuate firepower any more than necessary. And they should lavish fire support on those manning the ramparts, helping offset the problem of dispersed strength.

By Clausewitzian logic it appears the best places for the PLA to stage a breakthrough would be the Miyako Strait and the Luzon Strait. Miyako Strait lies south of Okinawa. It’s the widest aperture between the China seas and the Western Pacific, spanning about 158 miles. It is also the entryway of choice for PLA vessels and aircraft. Chinese commanders thus might incline to force their favorite strait—especially since allied defenses have more geographic space to protect there and could prove more permeable. That section of the Great Wall could prove collapsible if stormed by determined attackers.

The Luzon Strait lies to the south, separating Taiwan from the main Philippine island of Luzon. It thus rests between a not-quite-ally and a wobbly ally of the United States—opening up space for diplomatic mischief-making on China’s part. It also boasts geophysical advantages. The strait lies far south of the main U.S. Navy and Japan Maritime Self-Defense Force bases at Yokosuka and Sasebo. Distance would stretch allied logistics unless Manila permitted the allies to use Subic Bay and other Philippine facilities. In other words, it would prove hard to sustain a nautical cordon without help from President Duterte. And Duterte is a weak reed on which to rest one’s fortunes.

Policing the Luzon Strait could prove taxing in the best of times, for anti-submarine forces in particular. The deep Bashi Channel runs through the strait, offering submarines and other undersea vehicles a convenient gateway between the South China Sea and Pacific Ocean. Moreover, environmental and hydrographic conditions prevalent in the strait befriend those who want to elude detection; their assailants less so. In short, the Miyako and Luzon straits are not the only candidate sites for the PLA’s great escape. But they are prime candidates.

There is at least one variant to a PLA breakout strategy. Rather than burst through one or more straits in force, the PLA Navy could try to sneak forces through the cordon and employ them to assault islands from easterly points of the compass. Military folk love to “envelop”—meaning surround—their objectives in order to sunder them from outside support. Insinuating forces into the Pacific, then mounting attacks from all axes, would bolster PLA forces’ chances of success amid trying circumstances.

Second, PLA commanders might mount a broad-front offensive rather than thrust a spearhead at a single point. Strategist Edward Luttwak portrays the choice between advancing along a broad or a narrow front as the pivotal choice in theater strategy. Broad-front operations would probe the allied defenses all along a major segment of the island chain, more or less simultaneously. Where they found weakness, PLA units would pour through in what English soldier B. H. Liddell Hart calls an “expanding torrent,” supported and followed by adjacent Chinese forces. If successful, the torrent would further erode the defenses—widening the breach to the shores of the islands adjoining the strait. Access to the Pacific would be restored at least temporarily.

Third, In all likelihood, PLA commanders would want to wrest the islands flanking a newly reopened strait from their guardians. Emplacing PLA forces in a commanding position would consolidate their hold on the contested seaway. Otherwise, the allies might rush in reinforcements to cement the line—and imprison Chinese forces within the China seas anew. Seizing islands would demand multiple amphibious landings coupled with fire support from the PLA Air Force and Navy. And indeed, Beijing has plowed considerable effort and resources into amphibious forces in recent years.