This Is What It's Like to Shoot a Chain Gun 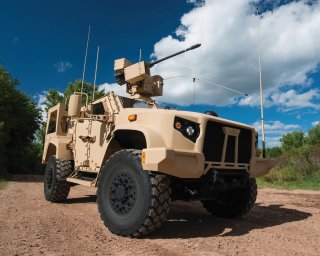 Here's What You Need To Remember: While the battle-tested .50-cal is not going anywhere soon, a heavier, longer-range cannon equipped with a wider range of ammunition, is better suited for attacking enemy armored vehicles, troop concentrations and other targets likely to make up part of a heavy mechanized force.

(Kingman, Ariz.) It looked like streaming balls of fire lighting up the air, accompanied by a very loud noise, smoke and the sight of a large firey explosion on the other side of a desert canyon.

The backward thrust was very powerful, throwing me back what felt like several feet. All this seemed to happen at once, when I first tried to fire an M230LF Lightweight 30mm Cannon Chain Gun, an extremely lethal rapid fire gun now arming the Army's armored Stryker vehicle. The weapon represents a new adaptation of the 30mm Chain Gun now arming the Apache attack helicopter.

This weapon is not a rifle, shotgun or small arm in any way - it is a combat-vehicle mounted war cannon engineered to take out enemy vehicles, convoys or troop concentrations.. It was, by far, the largest and strongest gun I had ever fired. I was shocked by what seemed to be its destructive power. It did not just “hit” or “go through” a target - it exploded it, yet with precision targeting, placing multiple fast-moving Chain Gun rounds through the same target hole, one after the other.

“It is a lightweight application. You can mount it on any vehicle that has a turret ring adapter. It acquires targets through an operator behind the weapons system. It has reverse acting hydraulic brakes similar to what you would find on an ATV or motorcycle. The gunner releases the brake system and acquires the target,” Vince Virga, product engineer, Nobles, told me at the range - while showing me how to safely man and fire the cannon.

Once my instructor showed me how to flip off the safety switch and arm the weapon, I was left to myself to mount what might be called a “not-so-impressive” attempt to fire the weapon; My first two shots, at a desert firing range in Kingman, Ariz., were way off. I was surprised by how heavy the gun was. The firing took place at a Northrop Grumman-sponsored Bushmaster Users Conference in the Arizona desert intended to test, assess and demonstrate some of the latest emerging weapons, ammunition and combat tactics.

I used two horizontal grip handles move the sights onto the target; I had to use a lot of force to move the gun. That is because I fired a land-based 30mm; in combat vehicles the weapon is often controlled by a Remote Weapons Station which rotates the gun with less human force. Targeting skill, however, is crucial to an effective 30mm cannon attack - as I saw when inside a Stryker vehicle watching a gunner line up and fire the weapon - obliterating a ground-robot drone target moving across the desert firing range.

“I release a switch and send a signal to the Remote Weapons System. I release my dead man’s switch and cue the gun,” Willie Gabbard, Stryker gunner, Northrop Grumman, told me while sitting inside a Stryker at the gunner’s station.

The concept with the weapon is, naturally, to bring much more firepower and wider ammunition options than the .50-cal machine guns or Mk19 grenade launchers now arming many combat vehicles.

“The M230LF has better target effects against light skinned armored vehicles. We are designing a multi-function proximity fuse to give you an air burst type capability,” Clay Bringhurst, VP Sales, Strategic Development, Nobles, told me at the firing range. “What Northrop has done is put a longer barrel on it they’ve linked to the ammunition so it could be used on a ground platform.”

Chain Guns, which can fire an ammo “belt” draw power from an external source instead of diverting energy from the cartridge to fire ammunition in a loop.

The gun looked like a horizontal rectangle mounted on a metal stand, to replicate a firing configuration from a combat vehicle, I imagine. There were what looked like binoculars - two eye holes in the rear of the gun to look through. When I looked through, the white-circle target, placed among shrubs growing on a brown hill, looked clear, magnified and much closer than it was. I saw a while cross through the sights, indicating the desired “hit” spot. After tanking several hits, I managed to put a round through the white circle target. Target was not far away - maybe a few hundred meters - and frankly it can be hard to miss short range targets, it seems, with an automatic gun with these kinds of targeting and firing technologies.

“The M230LF is not much heavier than a .50 caliber machine gun, but adds a lot more firepower and also is easily integrated on to remote weapons stations. Additionally, the M230LF can easily be ‘man-fired’ also,” Jarrod Krull, Northrop Communications Manager, told me.

I had to sit on a stool to approach the weapon. I was required to wear ear plugs and body armor. .My instructor told me to press my chest against the mount so as not to be literally thrown back by the force of the cannon. The force of the shot is intense, particularly when it rapid-fires multiple rounds in succession like a machine gun. The 30mm rounds, shooting out of the gun with rapid fire look like small balls of fire flying after one another out of the end of the cannon. Then, faster than the eye can see, the fire balls disappear. I saw about three or four in a row, traveling one after the other with a small bit of space between them.

Emerging applications of the 30mm cannon Bushmaster Chain Gun align with the Army’s broader push to pivot toward preparing for great power war. While the battle-tested .50-cal is not going anywhere soon, a heavier, longer-range cannon equipped with a wider range of ammunition, is better suited for attacking enemy armored vehicles, troop concentrations and other targets likely to make up part of a heavy mechanized force.

Osborn previously served at the Pentagon as a Highly Qualified Expert with the Office of the Assistant Secretary of the Army - Acquisition, Logistics & Technology. Osborn has also worked as an anchor and on-air military specialist at national TV networks. He also has a Masters Degree in Comparative Literature from Columbia University. This article first appeared in 2019.