What Is Kamala Harris's Plan For Education? 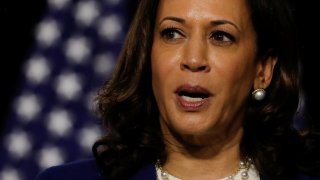 Vice presidents often have a policy portfolio that compliments their own experience. An obvious one for Senator Harris would be criminal justice reform, given her background. But it’s also worth exploring her views on education, should that fall within her White House duties if Biden and Harris win the election.

On the campaign trail, her primary K-12 proposal was to increase the average teacher salary by $13,500, which would cost an estimated $315 billion over 10 years. Under the plan, the federal government would work with states to establish salary goals and then create a three-to-one match for every dollar states put toward raising teacher pay.

Raising salaries will help ingratiate her with the teachers unions, but it will do little to address the real equity gaps facing low-income and black children. Unlike President Obama, her plan doesn’t connect any of the increases to performance or to difficult-to-staff subjects like math or science, although there may be additional targeted investment in high-poverty schools. It’s a missed opportunity to connect financial incentives to fulfilling multiple equity goals.

Senator Harris was also an early endorser of Senator Bernie Sanders’s College for All plan, which would make public colleges and universities tuition-free to students with family income up to $125,000, make community colleges tuition-free, and cut student loan interest rates in half. Although it sounds good in theory, my AEI colleague Jason Delisle has written extensively on why free college mainly benefits high-income families (as those who don’t qualify for federal aid must borrow the most) and how such measures wouldn’t cover living expenses, which contribute substantially to declining college affordability.

One of her landmark cases as attorney general was securing a $1.1 billion judgement against Corinthian Colleges, Inc on grounds that they committed securities fraud and consumer fraud. She wrote about the case in her book, “The Truths We Hold,” saying “there have been a rash of corporate predators who have taken advantage of — and often ruined — vulnerable people. Among the worst examples of these predators are the for-profit colleges that became the darlings of Wall Street during this time.”

For-profit institutions of higher education are often in the crosshairs of Democratic policymakers, but this concern for consumer protection rarely extends to public institutions. As a result, the country continues to face a massive higher education dropout crisis, with nearly 30 percent failing to complete. Just 49 percent of first-time, full-time students receiving a Pell Grant graduate from four-year institutions.

Lastly, Senator Harris has talked about the important role Howard University played in her life and thus pledged $60 billion for Historically Black Colleges and Universities (HBCUs). HBCUs play an important role in our system of higher education, particularly in boosting the economic prospects for thousands of Black students.

Looking beyond Senator Harris’s policy positions, it’s worth taking a moment to consider the larger narrative her story represents. Two immigrants came to the United States, married, and watched their child grow up to become a state attorney general, a senator, and now a member of a presidential ticket. Senator Harris’ story is a distinctly American story of immigration that deserves to be celebrated. And it stands in stark contrast to the Trump administration’s hostility toward immigration, particularly with foreign students and DACA.

Although Kamala Harris is a promising pick for the Democratic presidential ticket, families and education reformers must keep a close eye on what she advocates for when it comes to K-12 and higher education.

Learn more: To reopen learning, give students the internet | How teacher reciprocity can help schools reopen | A blueprint for reopening this fall: What will it take to get schools ready?

This article by John P. Bailey first appeared in AEIdeas on August 14, 2020.