What Makes the F-35B So Special? It Lands Like a Helicopter 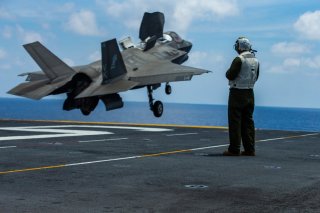 The Lockheed Martin F-35 Lightning II was only the second operational fifth-generation combat aircraft, but it is also essentially three planes in one. In addition to the conventional take-off and landing (CTOL) variant, the F-35A; there is the F-35C, which features larger wings and more robust landing gear, making it suitable for catapult launches and fly-in arrestments aboard naval aircraft carriers.

Then there is the F-35B, which is similar in size to the F-35A variant. However, the F-35B sacrifices about a third of its fuel volume to accommodate its shaft-driven lift fan (SDLF), which allows it to land vertically like a helicopter and take-off from very short runways. The system, which was developed by Rolls-Royce, is a descendant of the Pegasus engine 11-61/F402-RR-408, the most powerful version which is used in the Harrier AV-8B.

The system is comprised of a Rolls-Royce LiftFan, Driveshaft, 3 Bearing Swivel Module (3BSM) and Roll Posts. The LiftFan is capable of delivering 20,000lbf cold thrust and has a 50-inch diameter 2-stage counter-rotating fan that features a thrust vectoring variable area vane box nozzle. In vertical flight (lift-off and landing), the LiftFan produces 29,000 shaft horsepower and is capable of a 95-degree rotation in just 2.5 seconds. For lateral stability and roll control, bypass air from the engine is then used in a roll-post nozzle from each wing; while for pitch control, the areas of the exhaust nozzle and LiftFan inlet are varied while keeping the total lift constant. In 2001, the complete system, known as the Integrated Lift Fan Propulsion System (ILFPS), was awarded the Collier Trophy in 2001.

The ILFPS allows the F-35B to operate from austere or short-field bases as well as a range of air-capable ships near front-line combat zones. It can still take off and land conventionally from longer runways. A downside of this capability is that the LiftSystem components are essentially dead weight during flight and as a result, the aircraft has a smaller internal weapons bay and also carries less internal fuel. However, the F-35B uses the probe-and-drogue method for aerial refueling.

The Lockheed Martin-manufactured multirole fighter features low observable stealth while its active electronically scanned array (AESA) radar technology, and the ability to carry weapons internally enables the F-35B to engage ground targets at long ranges. It has a top speed of Mach 1.6 or 1,200 mph (1.6 times the speed of sound). It has a maximum thrust in excess of 40,000 pounds and an operational range of 900 nautical miles. The F-35B has a max 7G rating.

It features two bays for air missiles and an additional two bays for bombs up to 450kg, while it is also armed with an external 25mm cannon.