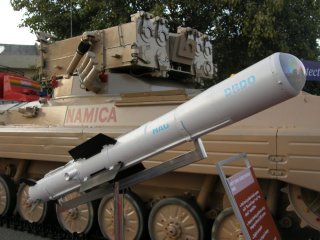 Here's What You Need to Remember: The NAD is not the only missile platform that has been undergoing testing. Earlier this month, the Indian Ministry of Defence also announced the flight test of the new generation anti-radiation missile.

India and China have continued to move men and material to the Ladakh Valley near the Line of Actual Control before winter sets in, and this has included a significant number of tanks and other armored vehicles. In some cases, the tanks and troops are just 400 meters apart. India has ferried in equipment via heavy-lift, and that included numerous T-72 and T-80 tanks, along with BMP-2 armored personnel carriers (APC). All of the vehicles have been modified and adapted to run on a special fuel mix designed specifically for the high altitudes and low temperatures of the region.

Last month the Indian military also conducted tests of its latest variant of the NAG anti-tank missiles near the Pokhran Test Range in the western state of Rajasthan. During the tests, the third-generation, all-weather, fire-and-forget anti-tank guided missiles (ATGM) reportedly destroyed the target with extremely high accuracy in both desert terrain and rugged frontier hills—terrain that is similar to that of the Ladakh region.

"This is the final test and the NAG program will begin to be deployed to all units in the military," the Indian Defense Ministry said in a statement.

Defence Aviation Post reported that the NAG is a product of Defence Research and Development Organisation Agency of India (DRDO).

The missile, which first underwent successful tests in September 1997 and January 2000, is equipped with an advanced passive navigation system, and it was designed to destroy modern tanks and heavy armored targets, and has a night strike capability. It has been launched from a ground-based launch pad or an airbase. During the test in January 2016, a NAG missile successfully destroyed a thermal weapons system (TTS) at a range of 4 km at the Pokhran range. This anti-tank missile also underwent the last of the practical tests in different weather conditions earlier this year—likely in preparation for deployment to the Himalayas.

The ground version, also known as the "Prospina," can also be mounted on a NAMICA (BMP-2 platform), which is among the armored vehicles deployed along the border with China.

The NAG missiles are constructed of lightweight and highly durable composite materials. These can be installed with four rockets, spread and length 1.85, diameter 0.20m, a wingspan of 0.4m and weighs 43kg. The missile is fitted with a targeting guidance system, while the middle body contains many compact sensors and warheads. The platform can fire six missiles in just 20 seconds, and it is designed to destroy or defeat enemy tanks equipped with composite and reactive armor.

Army Technology reported that Defence PSU Bharat Dynamics Limited (BDL) will produce the missile while Ordnance Factory Medak will manufacture the NAMICA. Indian Defence Minister Rajnath Singh congratulated the Indian Army and DRDO for the completion of the trial.

In 2018, the Indian Defence Ministry had cleared the acquisition of 300 Nag missiles and 25 NAMICAs for the Indian Army.

The NAD is not the only missile platform that has been undergoing testing. Earlier this month, the Indian Ministry of Defence also announced the flight test of the new generation anti-radiation missile. Dubbed the RUDRAM, it is the first locally developed anti-radiation missile of the country. Additionally, last month, DRDO announced that it tested the Hypersonic Technology Demonstrator Vehicle (HSTDV).