What Is That? The U.S. Army's (Failed) Plan for a Spy Blimp 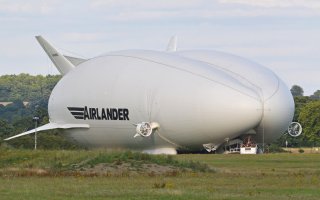 Here's What You Need to Know: Not every bold idea works out as planned.

The U.S. Army’s dream was a fantastical one. Build a 300-foot-long, helium-filled, pilotless airship, pack it with sophisticated sensors and other spy gear and park it over the remotest, most dangerous region of Afghanistan, where it would hover for three weeks at a time beyond the range of enemy gunfire, unblinkingly watching for enemy activity.

But the Army’s plan for building this so-called Long Endurance Multi Intelligence Vehicle, or LEMV, turned out to be just as fantastical as the vision for the giant robot airship. Badly managed and repeatedly oversold by its advocates, the LEMV’s prospects gradually deflated even as rising expectations across the military added pressure to the airship’s development.

Originally meant to cost as little as $150 million and go from blueprint to working prototype in just a year and a half, the giant airship drifted out of control. Between 2010 when the program began and its termination in early 2013, the cost of just one LEMV ballooned to $270 million. And the schedule for completing the airship stretched from 18 months to 36. The first LEMV managed just one brief flight over New Jersey in August 2012 before an embarrassed Army pulled the plug.

The subsequent sucking sound could be heard throughout the Pentagon, so to speak. While program mismanagement and budgetary overspends are nothing new to the Army, rarely have they had such devastating effect on an entire promising class of technology.

That’s because LEMV was the military’s last, best chance to revolutionize its aerial fleet with high-tech airships able to fly far longer, far cheaper, than existing warplanes. It’s no exaggeration to say that as the LEMV program sank to the ground, it dragged with it the Pentagon’s whole ambitious scheme to acquire futuristic war blimps.

Airships fought on the front lines for nearly a century. Hundreds were built for use in World Wars I and II. The U.S. Navy, one of the last major military airship users, finally retired its fleet of patrol blimps in the 1960s and replaced them with airplanes and helicopters. For nearly 50 years the idea of lighter-than-air weaponry lay dormant, giant abandoned hangars in California, New Jersey and North Carolina the only evidence of its glorious past.

Then the U.S. invaded Afghanistan and Iraq and found itself hunting elusive insurgents in crowded Iraqi cities and the vast Afghan countryside. Bad guys could hide out for days or weeks before striking. Planes, copters and even unmanned drones lacked the endurance to wait out these patient attackers.

So the Army installed video cameras on simple, tethered balloons and sent them thousands of feet into the air to watch over combat outposts. It was a small conceptual leap to untether the airship, add motors and remote controls and use them to patrol vast swaths of hostile territory for potentially weeks at a time — far longer than any manned aircraft or winged drone can manage.

And cheaper, too. Because of their buoyancy and relative simplicity, airships are highly fuel efficient and easy to maintain and thus cheaper than heavier-than-air craft, in many cases.

A jet fighter like an F-16 can cost $20,000 or more per flight hour for fuel and repairs. Large airships generally cost as little as a third as much per hour.

With a budget of more than $200 million, JIEDDO teamed up with the Air Force and Mav6, a Virginia-based aerospace start-up, to develop the Blue Devil II unmanned airship starting in 2010. Blue Devil would be a traditional blimp, its lift provided entirely by light, expansive helium gas. But on the inside, Blue Devil would pack some of the most sophisticated — and expensive — sensors and communications hardware ever developed.

By contrast, the Army wanted a somewhat more complex airship with less complex gear. The LEMV would be a so-called “hybrid airship,” which gets its lift from a combination of helium and also a flattened body that acts somewhat like a wing. Starting out, the LEMV’s cameras and radios would be roughly the same as those already used by Army drones.

LEMV and Blue Devil had similar technology and aims and began at around the same time; they couldn’t help but compete for funding. Moreover both new airships were supposed to be ready for combat trials in Afghanistan in 2011. The frontline testing would be expensive: $190 million for a year’s flying for just a single airship, according to one estimate. It wasn’t at all clear that Congress and the Pentagon would be willing to fund both.

“We are doing this to protect the soldiers on the ground,” Marty Sargent, the Army’s airship project manager, said of LEMV. But the giant blimp was also vying with the Air Force’s Blue Devil for another important role: clearing a flight path for a new generation of lighter-than-air war machines.

Cracks appeared in the program even before it went out for bids. Eyeing LEMV like a choice cut of technological steak, the Army’s top intelligence staff, then headed by Lt. Gen. Richard Zahner, wanted it for itself, according to one program insider who asked to remain anonymous.

Normally major weapons development programs for the Army are overseen by a dedicated organization with an unwieldy name: the Office of the United States Assistant Secretary of the Army for Acquisition, Logistics and Technology — a.k.a., ASA-ALT — whose sole job is to formulate specs, solicit bids from industry, draw up contracts and oversee the contractors’ work.

But the intel staff was determined to handle much of that work itself with bureaucratic reinforcements from the Army’s missile command, despite the intel staff and the missileers lacking experience managing new technology.

“We took it on for ourselves, because it is our soldiers that are going into these regional conflicts where we may not get the apportionment of strategic [intelligence, surveillance and reconnaissance],” explained Lt. Gen. Mary Legere, who succeeded Zahner in early 2012.

To keep the unusual development scheme afloat, the intel staff sought money directly from Congress instead of asking ASA-ALT to arrange for funding, which was standard procedure. After all, the staff had undercut ASA-ALT and could not expect favorable treatment for its giant spy blimp. To convince a skeptical Congress, the intel staff promised LEMV would be ready fast — just 18 months from the signing of the development contract.

The year-and-a-half deadline proved to be a fatal flaw. Allocating just 18 months for such a complex technology development was ambitious, to say the least and forced LEMV’s builders to cut a lot of corners. “A development timeline of twice as long would still be counted as aggressive,” Mav6's Jay Harrison commented.

At first there was competition. Aerospace giants Lockheed Martin and Northrop Grumman both wanted the LEMV contract, worth up to $517 million for several years of work designing and building as many as three huge airships plus all their on-board gear.

Lockheed was the clear frontrunner. The Maryland-based company already had a suitable airship in the air, the P-791. All the firm would have needed to do was add cameras, radios and other internal gear — admittedly a complex task. By contrast, Northrop in Virginia had no hardware at all and would have to assemble the LEMV blimp and its sensors and comms from scratch.

Everyone in Army intel assumed Lockheed would win. The intel staff even put the Lockheed airship on all the program’s flyers, posters and other promotional material.

But when it became clear how quickly the Army expected LEMV to be ready, Lockheed got cold feet. The Maryland company insisted it would take three years, not a year and a half, to complete the airship — even with the basic airframe already flying. “Lockheed basically gave the contract away,” Harrison explained. Northrop insisted it could meet the 18-month deadline and won the contract by default in June 2010.

Program manager Sargent defended the close deadline. “We are on a tight schedule but we want this to be successful for the Army and all services,” he said.

HAV struggled to build the airship on the Army’s truncated timeline. “It's not as though components were ready and you could just buy them,” said Hardy Giesler, HAV’s business development director. The British firm had to acquire custom-made LEMV components.

“They were told to move faster,” the anonymous program insider said. “In doing so, [HAV] didn’t focus on weight of the parts, but rather the speed of getting them to the States.” Torn between building the airship well and building it fast, the Army chose fast — and paid the price.