What Will the Coronavirus Situation Look Like In the Fall? 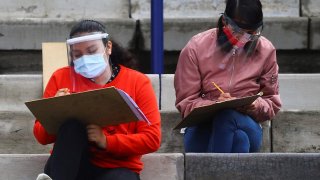 How much will schools depend on remote instruction this fall? What shape will the economy be in at the end of the year? And how far away are we from a vaccine? Scott Gottlieb, Rick Hess, and Michael Strain explored these questions, and more, in a recent episode of Political Economy.

Scott Gottlieb is a resident fellow at AEI, and he is also the former commissioner of the Food and Drug Administration. Rick Hess is a resident scholar and the director of education policy studies at AEI, and he is the author of several books, including “Breakthrough Leadership in the Digital Age: Using Learning Science to Reboot Schooling.” And Michael Strain is the Arthur F. Burns Scholar and director of economic policy studies at AEI. He is also the author of “The American Dream Is Not Dead: (But Populism Could Kill It).”

Below is an abbreviated transcript of our conversation. You can read our full discussion here. You can also subscribe to my podcast on Apple Podcasts or Stitcher, or download the podcast on Ricochet.

Pethokoukis: Rick, how prepared are schools to go fully remote this fall? And what is your best guess, over the course of this year, of what share of children will be going to school in person in the United States?

Hess: None of the 15 biggest school systems have said they’re going fully remote, and most of them are not ready. There’s little reason to think that anything is going to be much better than in the spring, which went pretty poorly. The Census Bureau reported that the average student got about 3.8 to four hours of instruction a week. Parents reported feeling overwhelmed. 30 percent of adolescents reported feeling depressed, isolated. We saw huge problems in terms of children’s general wellbeing. The estimates are that we saw unprecedented fall-offs in reading and math attainment.

It’s hard to guess how many children will have school in person this year. It looks like we’re going to start with maybe 20 or 30 percent of kids showing up this fall for at least a part-time in-person experience. Depending on the course things take, you could imagine that being over half of students by spring. You could also imagine it going the other direction.

Scott, what does the path of the virus look like going forward? It still seems like it’s pretty bad. Did we reopen too early? And are these numbers baked in, or is there anything we can do?

Gottlieb: I think it’s really hard to predict beyond really a month on any of these models, because there’s so much variability and so many things that are going to happen behaviorally that are going to impact the epidemic. I think we’re likely to see a slowing in the Sunbelt states, but we’re going to see other states heating up. Kentucky has a very big epidemic. Missouri, Ohio, Illinois, Tennessee all look like they have a big epidemic underway. Alabama, Louisiana, and South Carolina never really got out of their epidemics.

We just have too much infection around this country, and we don’t really have a uniform approach to combat it — we have disparate state-led efforts with regional effects — so we can’t simultaneously snuff it out. And I don’t know you’re ever going to get to a more consistent approach at this point. I think that there’s an inevitability to the situation we’re in right now, just from a policy and political and practical standpoint.

People said we reopened too early, and maybe there’s some truth in that. But I think the issue is more the speed of the reopening and how we reopened. We could have reopened early but reopened more deliberately and left certain things shut. We shouldn’t have reopened bars, and we should keep certain indoor congregate settings that are purely for entertainment closed in perpetuity until we can figure out whether we have control. The priority should be trying to open the schools and do other things that are more important from a social standpoint.

Mike, how’s the economy doing? There’s been some talk among economists that the V-shaped economic recovery is not happening, that the economy is sputtering. How do you see things?

Strain: The economy is in very bad shape. The most recent GDP report shows the economy contracted by about one-third on an annualized basis in the second quarter, which shows just how deep and how severe the recession was. That represents the worst quarter of economic performance since the US began keeping records in the 1940s. It’s devastating.

However, the economy in June was already considerably outperforming the second quarter average. So the economy is much better than it was at its low point. The recession probably lasted two months and is probably over. But so much damage was inflicted in the months of March and April that, even though we climbed quite a bit, we’re still in a very deep hole. It’s going to take many, many months of sustained rapid improvement until we’re finally back to where we were in February.

As long as we don’t actually slide backward in a sustained way, we’re going to have a good summer and we’re going to go into the fall in good shape. Having said that, we really need another significant piece of economic recovery legislation in order to have the kind of recovery that we should be having. And given how bad the second quarter was, even if the second half of the year goes really well, it’s inconceivable to me that the economy at the end of 2020 won’t be in much worse shape than the economy was at the end of 2019.

Strain: It’s really significant, and I think as a society we haven’t really given this enough weight. I’ve been disappointed with how people have been discussing schools as if they’re just daycare centers or credentialing institutes that don’t contribute to kids’ intellectual skill or social and emotional development.

Conventional economic estimates suggest that an additional year of schooling increases your wages as an adult by 9 percent per year, so this time out of the classroom could lower the wages of these kids by 10 or 12 percent once they reach adulthood. That’s going to hit lower income kids the hardest. It’s also a major cost to the longer term performance of the economy as a whole, and that’s to say nothing of the impact of school closures making it so hard for parents to go to work.

We really should be closing schools as a last resort. If we look back on this episode and we see that we let bars and tattoo parlors stay open, but we didn’t let kids go to school, then as a society we will have fundamentally failed to deal with this crisis.

Hess: It’s hard to design virtual education well under any circumstances. While it can work for some learners, lots of students (especially young students) need the human dimension of schooling. Many students go to class and learn because they like to see their friends and teacher. And they actually need to know their teacher as something other than an occasional square on a Zoom screen. To ask kids to spend the fall semester or an entire year learning from somebody whom they have never actually met in person is to be profoundly unrealistic about how kids learn and how teachers do their job.

Even for motivated adult learners, the rate at which people are actually able to lock in and benefit from virtual learning is quite limited and hugely dependent on design. So it’s important for kids to get into school buildings on at least a semi-regular basis.

And then there’s the question of whether or not children develop severe disease. Certainly, the morbidity skews heavily towards older adults, but remember that not a lot of kids have had this. The CDC documented about 250,000 cases of kids developing symptomatic illness, and there are 76 pediatric fatalities with COVID. That’s about the number of pediatric fatalities you see with flu, but in 2018-2019 about 11.8 million kids were projected to have symptomatic flu. So if COVID infected 11.8 million kids — I don’t think we want to see what that would look like. So we should make sure we reopen schools with precautions in place so that this doesn’t become epidemic in children.