What Will the Future of Biological Warfare Look Like? 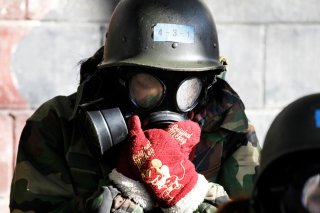 When fast-advancing infantry clear buildings and face multiple angles of incoming enemy fire, they know how best to adjust to or counterattack against enemy bullets based on extensive training, yet what about non-kinetic attacks invisible to human eyes or ears? Army futurists and combat developers are of course increasingly widening their scope to prepare for chemical and biological attacks to a greater degree, given advances in modern science and the nefarious tactics potentially employed by adversaries.

With these kinds of challenges in mind, Army scientists are working with cutting edge academics at MIT to refine a new generation of sensing technologies inspired, informed, and shaped by naturally occurring biological phenomena designed to instantly detect hazardous materials or toxins in the atmosphere.

While still years away from potential deployment, Army Research Office scientists and academics have demonstrated a massive breakthrough by combining cellulose with a biologically-based protein-secreting yeast to identify specific materials in the air.

“Our premise was to engineer living systems like cells or bacteria to use novel materials that could be used in a non biological circumstance,” Dawnee Poree, Program Manager, Army Research Office, Army Research Laboratory, Combat Capabilities Development Command, Army Futures Command, told The National Interest in an interview.

Should potentially invisible chemical or biological agents be released into a combat area to injure, cripple, disable or even kill soldiers, a specially engineered, biologically inspired synthetic material could alert forces of the danger, therefore enabling an opportunity for soldiers to put on masks, use filters or take other defensive measures. The mixture of materials, called Symbiotic Culture of Bacteria and Yeast, is cellulose embedded with enzymes being engineered through an Army partnership with MIT and Imperial College London. Yeast can be directly into the cellulose which can, according to an Army Research Laboratory essay, be “used to purify water for soldiers in the field or make smart packaging materials that can detect damage.”

The new materials come to life through the process of combining cellulose-producing bacteria with yeast to design properties either material would not otherwise have. The bacteria-produced cellulose can be used synthetically. There is a protein inside of the yeast, so whenever the substance comes in contact with a particular toxin, the yeast is secreted to “identify the particular thing in the air,” Poree explained.

Scientifically, the process involves a complex process wherein yeast is cultured or “co-cultivated with cellulose to secrete proteins able to sense “chemical and physical signals,” According to a scientific paper in the journal Nature called “Living materials with programmable functionalities grown from engineered microbial co-cultures.”

In essence, Poree explained that cellulose can be genetically modified by being cultured with yeast.

“Stable co-cultivation of yeast during the cellulose biofilm production phase provides a host cell that can easily be rationally programmed with DNA for dedicated tasks,” the scientific essay states.

At this point, it could be described as a very promising breakthrough basic research.

“What is unique about this is that biology has a wide variety of functions that are not available synthetically. It has been demonstrated that the engineers can sense different environmental stimulation,” Poree told The National Interest.