What Will the Next Generation of Fighter Aircraft Look Like? 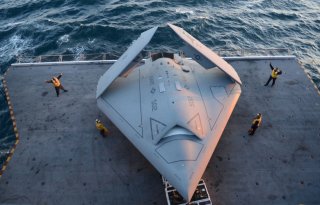 Key Point: Given how little is known about sixth-generation technologies, one might not want to refer to “loyal wingman” technology as a foregone conclusion for NGAD, yet the maturity of the technology for fifth-generation platforms such as the F-22 and F-35 stealth fighters would seem to make it highly unlikely that similar technology would be used for the sixth-generation.

What if a sixth-generation reconnaissance aircraft and stealthy attack drones were incorporated into part of a family of Next Generation Air Dominance (NGAD) platforms? The prospect of, for instance, a sixth-generation replacement for the E2D Hawkeye surveillance plane, was discussed in a recent Navy League breakfast by Rear Adm. Gregory Harris, who leads the Chief of Naval Operations Air War developmental unit, according to an interesting report by the U.S. Naval Institute.

In this context, Harris referred to a potential replacement for the E2/D Hawkeye surveillance plane, indicating some kind of early warning platform that might emerge in the form of a sixth-generation drone or unmanned system.

This would make a lot of sense in a number of respects, given that the Air Force’s “loyal wingman” concept is making rapid progress and is now airborne. This means that, perhaps not unlike the F-35 stealth fighter’s Multi-Function Advanced Data Link (MADL), sixth-generation platforms may be architected with some kind of target and data-sharing connectivity enabling expedited and highly efficient communications. With this kind of technology, there would be massively reduced latency because video feed surveillance data would not need to go through a ground control center but would rather be instantly exchanged, organized, and analyzed from the cockpit of a manned sixth-generation fighter. Given how little is known about sixth-generation technologies, one might not want to refer to “loyal wingman” technology as a foregone conclusion for NGAD, yet the maturity of the technology for fifth-generation platforms such as the F-22 and F-35 stealth fighters would seem to make it highly unlikely that similar technology would be used for the sixth-generation.

Extending Harris’ thought about manned-unmanned integration, it is certainly conceivable that a sixth-generation platform could be “optionally manned” or assisted by a sixth-generation- capable armed drone fighter jets intended to dogfight or engage in high-risk attacks under enemy fire. Interestingly, while some artificial intelligence-enabled autonomous jet fighter technologies have performed quite well in dogfighting simulations against human pilots in air-to-air combat, many contend that human decision-making in air combat cannot be accurately replicated and should not be replaced fully by machines. The Air Force has already experimented with an integration of the two and has already flown an aircraft operating with a manned pilot and AI-capable computerized co-pilot.