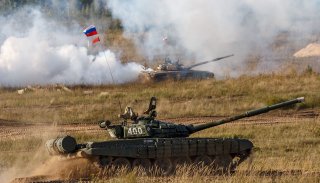 Here's What You Need To Know: Russia would need to size its invasion force to not only beat the local NATO forces in the Baltics but to fight the entire alliance and defeat a counter-attack.

If the Russians do not intend to invade the Baltics or have the forces in place to start a war, what might start a conflict in Latvia, Lithuania, and Estonia? Oliker posits a plausible scenario where a misunderstanding could spark a war.

If a war were to break out in the Baltics between Russian and NATO, it might ultimately be irrelevant what the conventional balance is on the ground. “The other problem with the fixation on conventional deterrence in the Baltic fight is that just as in the old standoff between NATO and the Warsaw Pact, this battle is fraught with opportunities for nuclear escalation,” Kofman wrote. “Most Russian experts I know in the military analysis community, including those in Russia, don’t see much of a chance for conventional battle with NATO to stay conventional.”