What Would President Lincoln Tell Us About Preserving the Republic? 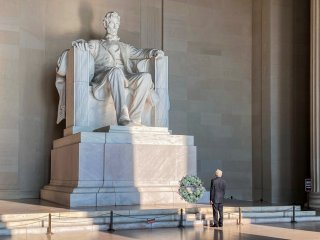 Many lament the decline in the teaching of civics and history that we are seeing in our schools.

According to a recent survey of core curriculums of 1,100 colleges and universities by the American Council of Trustees and Alumni, only 18% of institutions are requiring students to take a course in U.S. history or government.

In another survey, the National Assessment of Educational Progress found that only 24% of eighth-grade students perform at or above proficient level in civics.

But it is not mere nostalgia that should drive us to restore these essential components of an American education.

Angela Sailor, vice president of the Feulner Institute at The Heritage Foundation, recently pointed out that in this time of street protests and “cancel culture,” learning history and civics are essential for preserving the American republic.

In response to this crisis, Thomas Krannawitter has developed an innovative program that aims to rekindle Americans’ love for our founding principles.

In Colorado, where Krannawitter is based, he launched three social clubs, each of which met once a month and provided a yearlong, close study of the Federalist Papers.

He followed that with a 10-month program titled “Tragedy & Triumph: The Story of Slavery in the United States.” He points out that the American founding ignited the greatest anti-slavery movement in history.

“Through blood, sweat, and tears, Americans did more than any nation ever had to bring a swift end to slavery,” Krannawitter said.

Lucas Morel, a professor of politics at Washington and Lee University and author of the new book “Lincoln and the American Founding,” makes the case that, for President Abraham Lincoln, human equality was the central idea of the regime created by the Founders.

“Slavery was not created on July 4, 1776. It was refuted on that date—the grand anti-slavery statement of a people, the first time in human history that a people decided to form a government on the basis of equality,” Morel said, adding:

They didn’t wait to get rid of slavery to start the machinery of self-government that they believed in time would get rid of it.

As Lincoln put it, ‘Put it on the course of ultimate extinction.’

What did Lincoln learn from the Founders about the best peaceful, political way of weaning ourselves off of that awful institution, Morel asked. “Every Founder to a man believed that slavery was wrong. Not wrong for him—wrong for everyone.”

Krannawitter similarly pointed out that the Founders recognized that slavery was a blatant violation of their ideals. “They knew, before the ink was dried on the declaration, that in order to live up to their own ideals, they have to get rid of slavery,” he said.

The problem we face today is that far too few Americans understand why the Founders created the nation they did, in which men and women would not be ruled by the whims of a monarch, but by their own consent, or how truly revolutionary it was to build a nation based on an ideal of equality.

This lack of knowledge about the founding allows revisionist histories such as Howard Zinn’s “A People’s History of the United States” and The New York Times’ 1619 Project to divide the nation with their partisan propaganda.

“I think we’re at a time that we’re losing faith in these American principles, or at least questioning them. We’re confused about these institutions,” Morel lamented, adding:

How important is the rule of law? We’re valuing passion and even righteous indignation above the reason and deliberation that’s necessary to come up with truly good, practical, prudent solutions to our problems.

Without this foundation, I believe our diversity, which we make a lot of, won’t be a benefit to us, but put us on the path to further division, conflict, and chaos.

What would Lincoln tell us if he were here to see the crisis we face today? The United States remains the best place of hope, opportunity, and freedom, but we need to return to the founding to understand why.

As Morel points out, Lincoln himself continually turned to the Founders and to the founding documents—the Declaration of Independence and the Constitution—for guidance and inspiration.

He would surely tell us to do the same today.