What's the Gold Standard, and Why Did the U.S. Abandon It? 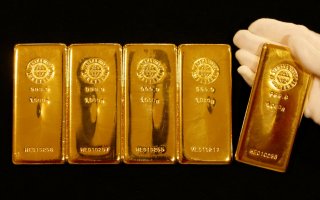 The phrase “the gold standard” means, in common parlance, the best available benchmark – as in double-blind randomized trials are the gold standard for determining the efficacy of a vaccine.

Its meaning likely comes from my world of economics and refers to what was once the centerpiece of the international monetary system, when the value of most major currencies, including the U.S. dollar, was based on the price of gold.

Some economists and others, including President Donald Trump and his Federal Reserve Board of Governors nominee Judy Shelton, favor a return to the gold standard because it would impose new rules and “discipline” on a central bank they view as too powerful and whose actions they consider flawed.

This is among several reasons Shelton’s nomination is controversial in the Senate, which voted against confirming her on Nov. 17 – though her Republican supporters may have an opportunity to try again.

As an economist whose focus is on exchange rate policies, I have spent a lot of time researching monetary and exchange rate policy. A look back at the gold standard and why the world stopped using it shows it’s best left as a relic of history.

A gold standard is an exchange rate system in which each country’s currency is valued as worth a fixed amount of gold.

During the late 19th and early 20th centuries, one ounce of gold cost $20.67 in the United States and ₤4.24 in the U.K.. This meant that someone could convert one British pound to $4.86 and vice versa.

Countries on the gold standard – which included all major industrial countries during the system’s heyday from 1871 to 1914 – had a fixed price for an ounce of gold and thus a fixed exchange rate with others who used the system. They kept the same gold peg throughout the period.

The gold standard stabilized currency values and, in so doing, promoted trade and investment, fostering what’s been called the first age of globalization. The system collapsed in 1914 at the outbreak of World War I, when most countries suspended its use. Afterward, some countries such as the U.K. and U.S. continued to rely on gold as a centerpiece of their monetary policies, but lingering geopolitical tensions and the high costs of the war made it much less stable, showing its severe flaws in times of crisis.

The onset of the Great Depression finally forced the U.S. and the other countries that still pegged their currencies to gold to abandon the system entirely. Economist Barry Eichengreen has found that efforts to maintain the gold standard at the beginning of the Great Depression ended up worsening the downturn because they limited the ability of central banks like the Fed to respond to deteriorating economic conditions. For example, while central banks today typically cut interest rates to boost a faltering economy, the gold standard required them to focus solely on keeping their currency pegged to gold.

The end of gold

After World War II, the leading Western powers adopted a new international monetary system that made the U.S. dollar the world’s reserve currency.

All currencies fluctuated in relation to the dollar, which was convertible to gold at a rate of $35 an ounce. A variety of economic, political and global pressures in the 1960s and 1970s forced President Richard Nixon to abandon the gold standard once and for all by 1971.

Since then, major currencies like the U.S. dollar have traded freely on global exchanges, and their relative value is determined by market forces. The dollar in your pocket is backed by nothing more than your belief that you’ll be able to buy a hot dog with it.

Return to the ‘golden’ years?

Arguments for returning to a gold standard reappear periodically, typically around times when inflation is raging, such as in the late 1970s. Its backers assert that central bankers are responsible for surging inflation, through policies like low interest rates, and so the gold standard is necessary to rein them in.

It is particularly odd, however, to advocate for a gold standard at a time when one of the main problems a gold standard would supposedly address – runaway inflation – has been low for decades.

Moreover, going back to a gold standard would create new problems. For example, the price of gold moves around a lot. A year ago an ounce of gold cost $1,457. The pandemic helped drive up the price by 40% to $2,049 in August. As of Nov. 18, it was about $1,885. Clearly, it would be destabilizing if the dollar were pegged to gold when its prices swings wildly. Exchange rates between major currencies are typically much more stable.

Importantly, going back to a gold standard would handcuff the Fed in its efforts to address changing economic conditions through interest rate policy. The Fed would not be able to lower interest rates in the face of a crisis like the one the world faces today, because doing so would change the value of the dollar relative to gold.

While there is often spirited debate about monetary policy, Shelton’s ideas are so far out of the mainstream, and suspicions of the political motivations of her positions are so prominent, that several hundred prominent economists and Fed alumni have urged the Senate to reject her nomination.

The Federal Reserve is an independent agency that is vital to America’s economic stability and prosperity. Like the courts, it is important that it acts with integrity and free from political considerations. It’s equally important that it not adopt discredited policies like the gold standard, which is a very poor example of the aphorism it inspired.