What's Happening With Coronavirus? 7 Things You Need to Know. 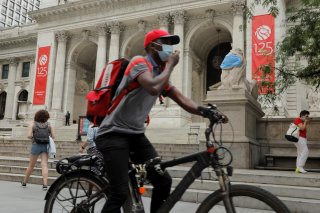 COVID-19 new case numbers have spiked in the past couple of weeks, led mostly by warmer states (Arizona, Texas, California, the Southeast) and — this is new — by infections among 20–29 year olds. Hospitalizations have risen markedly in many of these same states. How did this happen, and what does this signify about what to expect in coming weeks?

Assisted by a useful survey of the question in a recent Dispatch, here are some tentative observations:

1) This isn’t a matter of “we’re testing more, so naturally we’re finding more.” If more intensive testing were responsible for a higher rate of case‐​finding, you’d expect the percentage of tests that come back positive to be declining, as testing effort gets pushed into lower‐​risk communities. Instead, test positivity rates have ceased their long decline and instead begun to rise, especially in states at the center of the surge.

2) The hope that the virus would recede in summer, which seemed so plausible this spring, is looking busted. The regional Sunbelt nature of the June resurgence, with the North mostly spared, suggests that air‐​conditioned indoor environments may efficiently spread the virus. Unfortunately, the North uses air conditioning too, and trends in the North over the past week have begun to tip from favorable to less so.

3) Venues at which college‐​age and twenty‐​something people socialize are heavily implicated, above all bars, which have been linked to outbreaks in many places including East Lansing, Mich., Baton Rouge, La. (Louisiana State), the Delaware coast, and many more. Prison outbreaks continue. So do church and workplace outbreaks, the latter often relating to settings with air‐​cooled environments, worker dormitories, or both.

4) Outdoor transmission, on the other hand, whether in recreational or protest settings, continues to yield few if any well‐​documented U.S. outbreaks. Officials in San Marcos, Texas, for example, say they suspect both river tubing and protests might be driving infections among local young people, but details are not forthcoming. The community is host to Texas State University. Despite scattered reports of positive test results among protesters and police, cases actually traced with any confidence to outdoor transmission during George Floyd protests appear to be few. Even though New York City Mayor Bill De Blasio and authorities in a few other big cities have asked contact tracers not to inquire into protest‐​related transmissions, that policy does not seem to have been adopted widely enough to keep a pattern of large‐​scale protest spread from showing up, if there is one. It should be noted however that incubation periods, and randomness in the role of “super‐​spreaders,” can confound the data — also that people attending outdoor protest or recreation events may get there by crowding into vehicles.

5) Complicating matters further, a National Bureau of Economic Research study suggests that because so many people stayed home during the disruptions, to quote the Dispatch, “social distancing increased on the whole in cities with major protests during the days when those protests were at their fiercest.”

6) On social media, law professor Glenn Reynolds argues that some analyses miss “the second‐​order effect — which I think was probably large — of people seeing public health authorities writing off protest concerns and concluding that the lockdown was effectively over, changing their own behavior in various ways in response.”

7) Hospitalizations lag infections, and deaths lag hospitalizations. Hospitalizations have now risen sharply in places like Texas and Arizona, while deaths, which had been in steady decline, have instead leveled off and are beginning to show signs of a possible upturn. Some propose that with the caseload skewing so much younger, and since young adults tend to suffer milder cases, the upturn in hospitalizations will not necessarily be followed by an upturn in deaths.

There’s a lot riding on that bet.

This article by Walter Olson first appeared in CATO on July 1, 2020.