When it Comes to Camouflage, No One Beats the U.S. Marine Corps 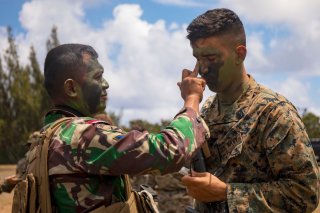 Here's What You Need to Remember: Like other camouflage, the MARPAT pattern is designed to blend the wearer with his or her surroundings to make them less visible to the naked eye. MARPAT camouflage achieves this through the use of pixilated fractals, essentially rectangular pixels, which camouflages the wearer over a range of distances, or scales.

Marines are easily recognizable by their uniforms—this is by design. The Marine Blue Dress uniforms feature a wide red “blood stripe” that is easily identifiable. But not only are their dress uniforms unique, so are Marine combat uniforms.

A more complicated pattern, the Erbsenmuster, or Pea Pattern design issued to Waffen-SS troops sometime in 1944. This five-color pattern was arranged in small, irregularly shaped pea-sized dots in several shades of brown, green, and black. It better camouflaged the wearer in environments it was adapted to than the Eichenlaubmuster pattern but saw limited service. A similar Flecktarn pattern is the German Bundeswehr’s current standard-issue camouflage pattern.

USMC combat uniform, or the Marine Corps Combat Utility Uniform as it is officially known, is equally distinct from the uniforms of other military branches. The combat uniform features a unique design, called MARPAT, short for Marine pattern.

MARPAT comes in both a black, dark green and brown woodland variant and a desert variant. There is also a simple white and grey smock and trousers that can be worn over standard battle dress for snow conditions.

MARPAT serves two purposes. First, to camouflage the user. For comparison, the MARPAT pattern has a lower infrared signature than standard Navy-pattern camouflage. The other, perhaps more important purpose of the pattern is to strike fear into the hearts of the enemy. Somewhat paradoxically, MARPAT leverages the fierce reputation of the Marine Corps to damage an enemy’s morale by identifying a wearer as a U.S. Marine.