When Nazi Germany (Sort Of) Went to War With Japan 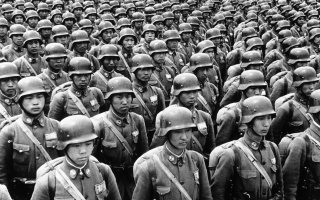 During this time, German advisers including Falkenhausen were often near or in the fight in Shanghai, despite Berlin’s preference that they not get directly involved.

“We all agreed,” Falkenhausen wrote, “that as private citizens in Chinese employment there could be no question of leaving our Chinese friends to their fate. Therefore I assigned German advisers wherever they were needed and that was often in the front lines.”

Despite being present for some heavy combat, no Germans advisers are known to have died.

The Chinese held out until November, but eventually retreated in the face of Japanese armor, air and naval attacks. Tokyo was badly bruised by the Chinese defensive and livid at being defied by an “inferior” race.

Particularly embarrassing was the showdown at Sihang Warehouse, in which a lone battalion from the 88th Division held out against Japanese attacks in full view of the international district.

But now the Japanese were ready to strike at the Chinese capital of Nanjing. En route they took out their frustration on Chinese civilians, killing and looting wantonly. Even Kriebel, who had been so contemptuous of the Chinese before and was back in China as the German consul general in Shanghai, expressed his disgust at the atrocities.

But the march on Nanjing was just a preview of how ugly things were to become.

Chiang called a meeting of his generals with Falkenhausen to plan their next move. Generals Li Zongren and Bai Chongxi—the latter a favorite of Falkenhausen—advocated withdrawing forces from Nanjing to regroup.

Next, the generals proposed declaring Nanjing to be an undefended city so that the Japanese wouldn’t have any excuse to slaughter civilians.

Falkenhausen backed Li and Bai. The only dissenter was Gen. Tang Shengzhi, who demanded a last stand against Japan in the capital. Chiang, wanting to preserve his prestige and at least make an effort to defend Nanjing, deferred to Tang.

John Rabe, a German businessman and prominent Nazi living in Nanjing, was aghast “[Nanjing] cannot be effectively defended,” he wrote. “Sitting in this crook in the Yangtze is like sitting in a mousetrap.”

“I continue to hope that Hitler will help us,” Rabe continued. “A man of firm will and steady eye — the same as you and I — has deep sympathy not only for the distress of his own people, but for the anguish of the Chinese, as well.”

Rabe speculated that if Hitler were to demand a stop to the Japanese advance, it would halt immediately.

The consequences of this last stand were disastrous. The Chinese defenders were obliterated. Many of the remnants of the elite 88th Division were destroyed in the fighting, though some were able to rejoin the army in the west or blend into guerrilla bands in the countryside.

Although exact numbers are disputed, most historians agree that thousands of women and girls were raped by Japanese troops—and somewhere between 180,000 and 300,000 civilians died.

Rabe, along with other Western residents of the city, labored hard to aid the refugees and was instrumental in setting up the International Safety Zone. He was known for wearing his Swastika armband as he escorted Chinese nationals around, standing up to Japanese soldiers and officials.

Despite the initial hesitance of other American and European expats to work with an avowed Nazi, Rabe earned the respect of both westerners and the residents of Nanjing.

Unfortunately for Rabe’s faith in Hitler and in Germany’s commitment to China, the defeat at Nanjing led Hitler to believe that China was a lost cause. It was the beginning of the end for Sino-German ties. To Hitler, the Japanese had proven to be a superior race to the Chinese.

But one more battle was to take place before Germany quit China for good.

In the Battle of Taierzhuang in early 1938, Chinese troops under Generals Li and Bai engaged Japanese troops in the small town of Shantung. The Chinese troops, led by German-trained battalion commanders, maneuvered at night to avoid Japan’s superior air assets and used German-built howitzers to smash Japanese entrenchments.

The Chinese prevailed at Taierzhuang. After the battle, the Japanese demanded that the Germans withdraw the advisory group. Hitler complied without reservation. German Foreign Minister Joachim von Ribbentrop told Falkenhausen to withdraw, which he did only under extreme pressure.

Falkenhausen and his staff reluctantly returned to Germany. Unlike former Italian advisers who profited by selling detailed aerial surveys of China to Japan, many of the Germans refused to divulge Chinese secrets to Japan, even under pressure from the Nazis. Chiang Wei-Kuo, by that time commanding a panzer on the border with Poland, was recalled back to China.

Westerners were horrified by the devastation in China. Urban warfare up to this point had been a fairly rare occurrence in modern warfare. Certainly the scale of death and destruction, particularly among non-combatants, seemed new. In a few years, such bloodshed would all too common all over the world.

After the German Blitzkrieg tore through Western Europe beginning in late 1939, Falkenhausen was appointed to serve as the German military governor of Belgium—a position in which he took neither joy nor pride. Among his tasks were the suppression of Belgian resistance and the rounding up of Jews and other undesirables.

Throughout much of his tenure in Belgium, Falkenhausen was secretly in touch with anti-Nazi conspirators and those helping to rescue Jews.

The rescuers included Qian Xiuling, a Chinese woman who had married a Belgian man she’d met while studying chemistry at the Catholic University of Louvain. Qian’s cousin was an officer in the Chinese army and had been trained by Falkenhausen. He told her through correspondence that if she needed anything, she should go to Falkenhausen.

The general helped Qian save the lives of many Jews and dissidents. After an attempt on Hitler’s life in July 1944, Falkenhausen was imprisoned and spent the remainder of the war in concentration camps, at one point being interned in Dachau.

He was eventually liberated, but then subsequently arrested by U.S. troops. He was sent back to Belgium to be put on trial for crimes against humanity. Qian and others he had aided came to his defense, but he was nevertheless sentenced to 12 years hard labor.

He was pardoned after only three years and moved back to Germany. Chiang, having heard of his fate, began sending money and gifts to his old comrade. But Faulkenhausen was so embittered by his experiences that he lived out the rest of his life a jaded, reclusive old man. He died in 1966 at the age of 88.

In 2001, when a journalist asked an aging Qian how she saw Falkenhausen, she replied simply, “A man with morals.”

Rabe fared little better after the war. Living in Germany again by then he was arrested first by the Soviets and then by the British. Although never directly implicated in any crimes, his history as a high profile party member meant he had to be declared “de-Nazified.”

Unable to find work, he sold off his collection of Eastern art to buy food and quickly became destitute. According to some accounts, he received aid from prominent citizens of Nanjing who had heard of his plight. This help ceased after the Communists took Nanjing from the nationalists.

Rabe died of a stroke in 1950. His headstone has since been moved to Nanjing and his house made into a museum.

The strange tale of the Germans in China’s wars demonstrates how quickly loyalty and national interest can shift—and alliances with them. It also reveals that personal ties formed in the crucible of combat can transcend these shifts and last a lifetime.

Unfortunately for men like Falkenhausen, the saga also shows how steep the price of integrity can be.

This article by Kevin Knodell originally appeared at War is Boring in 2014.