When A Russian Frigate Mutinied, Tom Clancy Saw His Chance 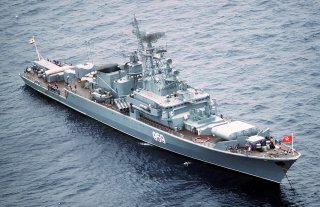 Here's What You Need To Remember: Moscow covered up the incident by staging naval exercises the next day. The bomber pilots were reprimanded for the friendly fire incidents and logistical confusion. The Storozhevoy’s crew were detained for months, but in the end, only a handful of officers were tried.

On the evening of November 8, 1976, Captain Anatoly Potulny, commander of the Soviet anti-submarine frigate Storozhevoy (“the Sentry”) was informed that several of his officers were drunk below deck in the forward sonar compartment. This was reported by the ship’s charismatic political officer, Captain Valery Sablin, responsible for maintaining crew morale and loyalty. Potulny went below deck but saw nothing amiss—then he heard the click of the hatch locking above him.

“Sorry, I could not do otherwise,” Sablin told him as the captain pounded on the hatch. “Once we arrive at our destination, you will be allowed to choose your destiny.”

The 37-year old commissar had always stood apart for his exceptional idealism. While a cadet, he had even written Nikita Khrushchev offering pointed advice on Leninist reforms. Now he was critical of Premier Leonid Brezhnev, who during the ‘Era of Stagnation’ focused spending on military projects and walked back political reforms. Sablin was upset by the privilege and corruption of the Soviet bureaucratic elite in a supposedly classless society.

The commissar told his aid, twenty-year-old Lieutenant Alexander Shein, to take up guard, handing him a pistol. Then Sablin convened the ship’s sixteens officers and revealed his plan: to sail the Storozhevoy from its quay in Riga, Lithuania to Leningrad 500 miles northeast. The frigate would berth at Kronstadt Island—the site of past naval mutinies that had inspired Russian revolutions in 1905 and 1917. (The former was commemorated in Sergei Eisenstein’s Battleship Potemkin, which Sablin played in the background.) There he would broadcast his call for a new Leninist revolution.

The ship's officers voted whether to support Sablin by casting black and white checker pieces in a cup—resulting in a tie. However, most of the ship's crew took Sablin's side and locked the dissenting officers in their cabins. Sablin then gave a speech:

"The leadership of the party and the Soviet government have abandoned the principles of the revolution. There is no freedom, nor justice. The only way out is a new communist revolution… It is assumed that the current state apparatus will be cleared away, and some of its institutions broken up and cast into the dustbin of history. Will these issues be addressed through the dictatorship of the proletariat class? Necessarily! Only through the greatest national vigilance is there a path to a society of happiness! "

Sablin envisioned the Storozhevoy’s politically independent crew daily broadcasting calls for reform across the nation, while furnished with necessary supplies and immunity from prosecution.

The seamen cheered their support. However, one of Sablin’s supposed supporters, Lt. Firsov, snuck off the Storozhevoy and alerted the incredulous guards of a nearby submarine.

Sablin had planned on leaving with the fleet the following morning before peeling away north. Realizing his plot risked exposure, Sablin slipped the frigate out at midnight with radar and running lights deactivated, braving the treacherous shoals of the Daugava River.

The Soviets Strike Back

To get to Leningrad, Sablin first had to cruise north into the Baltic Sea—towards Sweden. As the Soviet Baltic Fleet slowly grasped what was happening, it assumed the Storozhevoy was defecting to the Scandinavian nation. After all, this had happened before in 1961, when Lithuanian Captain Jonas Plaskus surrendered his submarine tender at Gotland Island.

However, the 18-month-old Storozhevoy was one of the Navy’s advanced Burevestnik-class frigates (NATO codename Krivak I). It was designed to hunt U.S. submarines from up to fifty miles away using short-range RBU-6000 rockets and far-reaching SS-N-14 Metel (“Snowstorm”) missiles. It would be a disaster for the sophisticated sub-hunter to fall into Western hands.

A Vice Admiral futilely begged Sablin on the radio to turn around, promising forgiveness. Finally, Premier Brezhnev was woken from his sleep at 4:00 AM with the bad news. He authorized using lethal force to prevent a humiliating defection.

However, visibility was poor, and the silent-running Storozhevoy was hard to locate in the open Gulf of Riga. But at 6:00 AM, Storzhevoy herself encountered dense fog, causing Sablin to activate his radar to avoid collisions with commercial traffic. Furthermore, as she was passing the Irbe Strait, she was spotted by a lighthouse.

Yak-28s vectored to Irbe spotted a ship and lobbed FAB-250 bombs that raked her hull with shrapnel—but that vessel was actually a Soviet freighter bound for Finland.

Then around 8:00 AM, Tu-16s closed around the Storozhevoy's radar emissions. The huge jet bombers were armed with radar-guided KSR-5 ‘Kingfish' cruise missiles programmed to hone in on the first target acquired. But the frigate was now in the international waters of the Baltic Sea, and the pilots refused to fire, either unwilling to risk hitting a neutral ship or possibly unwilling to fire on fellow Soviets. Swedish radar operators observed the frenetic Soviet air and naval activity and listened in on their radio traffic.

Finally, all thirty-six Yak-28s of the 668th were scrambled to join the hunt—narrowly avoiding a fatal collision on the runway. Meanwhile, two missile boats under Captain Bobrikov closed within the fifty-mile attack range of their P-15 Termit anti-ship missiles.

However, the Yaks struck first. One silvery jet pocked the port side of the Storozhevoy with twenty-three-millimeter cannon shells. The frigate boasted two rapid-fire three-inch dual-purpose guns on the stern and SA-N-4 Osa anti-aircraft missiles but did not fire back, either lacking loaded ammunition or under orders from Sablin not to return fire.

The jets began making repeated bombing runs, causing water to geyser over the frigate from near misses. But one FAB-250 smacked into the stern of the ship, blasting off the rear deck cover and jamming the steering gear. Taking on water, Storozhevoy began circling before coming to a halt only fifty nautical miles from Swedish waters.

Meanwhile, three crew members broke Captain Putolny out of the sonar compartment. Taking a pistol, he stormed onto the bridge and shot Sablin in the leg. At 10:32 AM he desperately messaged: “The ship is stopped. I have taken control.”

The Yaks aborted their attack runs, but not before one group mistakenly attacked Soviet pursuit ships and was fired upon in return, without effect. Naval Infantry then boarded the Storozhevoy and arrested her crew.

Years after Sablin’s failed plan, U.S. historian Gregory Young pieced together accounts of the mutiny in a thesis later read by an insurance salesman named Tom Clancy. Inspired by the story and that of a previous Soviet defector, Jonas Plaskus, Clancy went on to write Hunt for the Red October. But unlike the novel’s disillusioned submarine captain Marko Ramius, Valery Sablin risked all not to defect, but in a quixotic attempt to reform the Soviet system he passionately believed in.

Sébastien Roblin holds a Master’s Degree in Conflict Resolution from Georgetown University and served as a university instructor for the Peace Corps in China. He has also worked in education, editing, and refugee resettlement in France and the United States. He currently writes on security and military history for War Is Boring. (This first appeared two years ago.)