When Russian Su-27 Flankers Chased an American Spy Plane Away 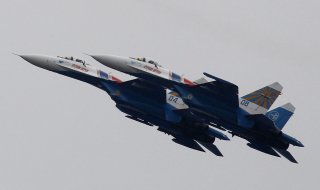 Here's What You Need to Know: Russian aerial activity in the Baltic region has been on the rise for years — and escalated sharply following Russia’s invasion of Ukraine in early 2014. Fighters from NATO and neutral countries have intercepted Russian planes on hundreds of separate occasions since then.

This article by David Axe originally appeared at War is Boring in 2017 and is being republished due to reader interest.