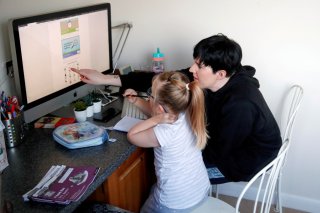 The COVID-19 pandemic has been disastrous for many children, whose education and development have been badly affected by repeated school closures.

Schools in the UK were first closed to most pupils as a pandemic control measure in March 2020 and again in January 2021 in response to the spread of the new variant of coronavirus.

The prime minister, Boris Johnson, has said that students in England will not return to school before March 8. Northern Ireland has selected the same date for the earliest possible return. Scotland’s first minister, Nicola Sturgeon, has announced that students will return in phases from February 22, while Wales is still considering when its school will reopen.

The closure of schools has been widely accepted, although it was recognised that the measures would hit children hard, especially those from deprived backgrounds, and those most vulnerable for medical or social reasons.

The effect of closing schools

School closures reduce educational opportunities for children, with experts pointing to months of “learning loss”. It is not easy to deliver remote learning to all children, especially 1.8 million children in the UK do not have access to an internet-enabled device.

School closures are also associated with increasing social isolation, poor wellbeing, domestic abuse and neglect. Children with disabilities are especially affected. They are generally more isolated than others and the support services they need may also be closed.

There are also consequences for parents and carers who may experience greater stress and mental health problems, as well as affecting their job security due to the pressure of home schooling.

Some people argue that reopening schools is too risky. But it is a false dichotomy to judge schools as either “safe” or “unsafe”. The reality is more complicated. So what do we know so far about the actual risk of infection posed by children?

Numerous bodies including the World Health Organization, the Royal College of Paediatrics and Child Health and the European Centre for Disease Control and Prevention have conducted expert reviews of the international evidence on this topic. From these, we understand that children can get infected with COVID-19, but the resulting illness is usually milder. Children shed less of the virus for less time and the duration of child illness is also shorter than in adults.

Children are therefore less likely to pass on the disease than adults and less susceptible to infection themselves. They are also less likely to be superspreaders. There is, however, a gradient of risk, with younger children being far less infectious than older teenagers. This continues to be the case with the new variant.

The probable source of such outbreaks are instead infections within households, where the risk of infection is ten times higher than in schools.

The current evidence suggests that infections in schools are more likely to have been introduced by adults than children. The spread of infection within schools tends to be between adult staff or adult-to-child rather than between children or from children to adults.

Another major concern is the health of teachers and other school staff. Data from the UK Office for National Statistics reassuringly indicates that teachers are not at increased risk of infection or death from COVID compared to other occupational groups.

Likewise, investigations from Norway and other countries found no or very little transmission within schools.

All this means that schools can be made relatively safe with appropriate infection control measures such as face coverings, physical distancing, good hygiene and ventilation.

The heightened focus on school closures also distracts from a key fact – in the UK, 85% of infections occur in adults, most of them those of working age. Children account for fewer than one in six known infections in England.

So making schools safer means reducing infection levels in the wider adult population, not the other way round. And targeting resources at children who are likely to be less potent infection spreaders may well be an ineffective use of resources.

A measure of last resort

Overall, there remains uncertainty about just how effective school closures are as a pandemic control measure. The evidence base continues to grow and we still need more robust studies on the subject.

With the emergence of the new variant and skyrocketing infections over winter, it was probably inevitable that schools would be closed in the UK. But now, given that there is no “zero-risk” solution to solve the pandemic, decisions about reopening need to involve a close evaluation of the known and potential harms and benefits.

School closures might reduce overall community infections by a small amount and may be necessary when infection levels in the population are very high. But they should only really be implemented as a last resort as part of wider pandemic control measures and should not be undertaken lightly.