Who are the Hindu Goddesses of Contagion? 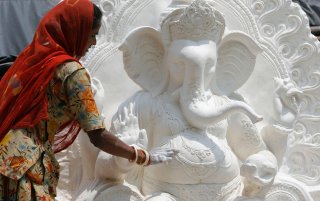 Hindus in India have had a helping hand – several in fact – when it comes to fighting deadly contagions like COVID-19: multi-armed goddesses co-opted to help contain and kill pestilence.

Collectively known as “Amman,” or the Divine Mother, the goddesses of contagion – and it always goddesses, not gods – have been called on for their services before. They have been deployed in many of the deadly pandemics India has experienced from ancient times until the the modern age.

In conducting my fieldwork as a cultural anthropologist who studies religion, I have seen small shrines all over India dedicated to these goddesses of contagion, often in rural, forested areas outside village and town limits.

The goddesses act as “celestial epidemiologists” curing illness. But if angered they can also inflict disease such as poxes, plagues, sores, fevers, tuberculosis and malaria. They are both poison and cure.

One of the first images of a contagion goddess recorded is of the demon-turned-goddess Hariti, carved and worshipped during the deadly Justinian plague of Rome that came to India via trade routes, killing between 25 to 100 million people globally. In the late 19th century, my hometown of Bangalore suffered an epidemic of bubonic plague, which required the services of a contagion goddess. British colonial documents record the repeated waves of illness that stalked the city, and the desperate pleas to a goddess named “Plague Amma.”

In south India, the premier contagion goddess is Mariamman – from the word “Mari” meaning both pox and transformation. In the north of India, she is known as the goddess Sheetala, meaning “the cold one” – a nod to her ability to cool fevers.

The goddesses’ iconography emphasizes their therapeutic healing powers. Sheetala carries a pot of healing water, a broom to sweep away dirt, a branch of the indigenous Neem tree – said to cure skin and breathing disorders – and a jar of ambrosia for eternal life. Mariamman, on the other hand, carries a scimitar with which to smite and decapitate the demons of virulence and illness.

Contagion goddesses are not angelic and gentle, as one might expect caregivers to be. They are hot-tempered, demanding and fiery. They are deemed wilderness goddesses – highly local and traditionally worshiped primarily by lower caste, Dalit, tribal and rural folk. Some are associated with tantric practices and dark magic.

Placating the goddesses through blood sacrifice, decorative offerings and self mortification, was – and in some places, still is – a way of preparing for a pandemic in parts of India.

Sometimes, painful piercings, hook swinging and self-flagellation were offered when patients recovered from illnesses, both mental and physical. Or in a sanitized version of blood sacrifice, small silver images of the patient were offered as a prophylactic against illness.

Rituals have often involved variolation. A devotee would be inoculated with infected pus and the goddess invoked through possession to save them. The aim was to trigger a milder form of the illness and gain immunity.

High caste Hindus and those who mirror high-caste practices often ignored and shunned the contagion goddesses, fearful of the blood rites, possession and the tantric rituals, which they associated with low caste worship.

But these local contagion goddesses merged over time with the Divine Mother Shakti, the feminine personification of the energy behind creation. This domesticated the goddesses, making them more acceptable to bourgeois Hindus.

With the widespread use of modern antibiotics, retrovirals and vaccines in the mid 20th century, traditional Hindu healing rituals became less relevant. Contagion goddesses were beginning to be forgotten and ignored. But a handful of them developed rich post-pox lives, reinventing themselves for modern afflictions. Some goddesses moved on from focusing on disease alone.

In Bangalore, a city plagued by traffic fatalities, the goddess Mariamman transformed from a cholera goddess into the protector of drivers. Now known as “Traffic Circle Amman,” the goddess’s temple sees cars and trucks line up everyday for blessings, before drivers face the deadly maelstrom of city traffic.

Other goddesses came into being to fight new illnesses. On Dec. 1, 1997, World AIDS day, a new goddess named AIDSAmma was created by a science schoolteacher, H.N. Girish, not to cure AIDS but to teach worshipers the prophylactic measures necessary to prevent the disease.

During the COVID-19 crisis all the contagion goddesses have been re-conscripted.

The Indian government’s quick action in instituting a stay-at-home lockdown that lasted two months prevented widespread contagion, but it also meant that people weren’t allowed to go to temples to worship the goddesses and ask for intervention. So priests offered special decorations, including garlands of acidic lemons believed to placate the goddesses.

The goddesses have also been recalled in posters by Indian artists that circulate through Facebook. Artist Sandhya Kumari’s rendering of “Coronavirus Mardini” – a hygienically masked Mother India attacking the coronavirus with a trident – recalled Shakti’s killing of evil, a familiar image to all Hindus.

A nationalistic caption was added during reposting – “Mother India will end the Coronavirus, but it is every Indians duty to stay at home and take care of loved ones. Jai India!”

In Kumari’s rendering, the goddess’s iconography is updated for the pandemic. The goddesses’ many gloved hands grasp sanitizer, masks, vaccination needles and other medical equipment. The coronavirus is held in chains, immovable and shorn of its virulence.

While controversies over temples reopening dominates the news, a new deity, crafted from polystyrene and called “Corona Devi” has been installed in a temple dedicated to the pox goddess. Mr. Anilan, the priest and single devotee, says he will offer worship for “Corona Warriors” – health care workers, firefighters, and other front line personnel. Here science and faith are not seen as inimical to one another, but as working together, hand-in-glove.

COVID-19 has undoubtedly increased the goddesses’ workload. And with no known cure and no viable vaccine, the contagion goddesses may well have their hands full for some time.