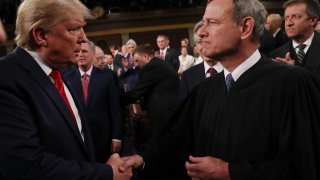 Although Oldham spent the bulk of his pre-judicial career as an advocate, it’s clear he has adjusted well to his judicial role, takes seriously his responsibilities to faithfully interpret and apply the laws and the Constitution as written, and is committed to fostering a robust public discussion about the basis and development of our constitutional order.

Judge, U.S. Court of Appeals for the 11th Circuit

Judge Elizabeth “Lisa” Branch spent several years in private practice and as an associate general counsel in the Department of Homeland Security and as both special assistant to the administrator and counselor to the administrator in the Office of Information and Regulatory Affairs, part of the Office of Management and Budget, during the Bush administration. In 2012, she was appointed to the Georgia Court of Appeals, where she served until her confirmation to the 11th Circuit in 2018.

My judicial philosophy is that I am an originalist and a textualist.  When I interpret a provision—be it constitution, statutory, or even [a] contractual provision—I am bound by the words in front of me and I look to what the words meant when they were drafted.  On a daily basis, I am mindful of my role as a judge; to interpret the laws. Not create laws and not enforce laws.

And her opinions on both the Georgia Court of Appeals and the 11th Circuit reflect this philosophy.  (See here, here, and here).

Branch demonstrated a willingness to tackle tough issues and issue a potentially unpopular decision in a recent dissent in Alabama v. Alabama State Conference of the National Association for the Advancement of Colored People (2020), a voting rights case out of Alabama in which she carefully analyzed the text of the Voting Rights Act to support her position that Congress “did not unequivocally abrogate state sovereign immunity under Section 2” of that statute.

She went on to say: “It is difficult to overstate the enormously important role that the abrogation doctrine plays in our federal system. … In its decision today, the majority erodes this constitutional principle by effectively dispensing with the express abrogation test required by the Supreme Court and replacing it with something novel and without foreseeable limitations: Congress prohibits state conduct, ergo abrogation.”

In that vein, Branch has expressed concern with courts incorporating or creating rights through the vehicle of substantive due process and also has highlighted her concern that religious liberty and employment discrimination laws are on a collision course, a prescient view in light of the Supreme Court’s recent Bostock opinion.

You may listen to an interview with Branch on “SCOTUS 101” here.

During the Bush administration, Francisco worked as an assistant and associate counsel to the president and as a deputy assistant attorney general in the Office of Legal Counsel. He then joined Jones Day, where he maintained a robust Supreme Court practice, representing the petitioners in Zubik v. Burwell and McDonnell v. United States, and the respondent in NLRB v. Noel Canning. He recently rejoined the law firm.

Both before and during his time as solicitor general, Francisco was a frequent speaker at legal conferences, including one at The Heritage Foundation following the death of his former boss, Justice Antonin Scalia.  Francisco also published a remembrance of Scalia in the Chicago Law Review. Through these reflections, we learn a lot about Francisco’s own views on the law, especially his reverence for, and commitment to, originalism and textualism.

Francisco has advocated thoughtful reforms to the Administrative Procedures Act, stating that “courts have an appropriate role to play in limiting agency excesses and enforcing the statutes Congress enacted.” Similarly, he has advocated a muscular Second Amendment as a structural protection—a backstop—designed to protect all other rights.

Trump’s judicial appointments since his inauguration in January 2017 are among his most significant achievements and will constitute an enduring legacy of his administration.

The list of potential Supreme Court justices that he compiled, and his pledge to stick to that list, were instrumental in his 2016 election.

We urge the president and White House counsel to give due consideration to these highly qualified individuals, who we believe have what it takes to serve with distinction on the Supreme Court.

This article by John G. Malcolm and Zack Smith first appeared in The Daily Signal on August 17, 2020.