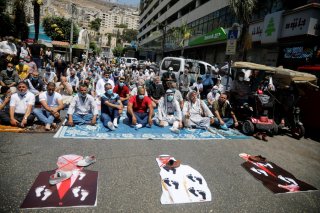 The heralded recent agreement to normalize relations between Israel and the United Arab Emirates may not be the grand achievement it was made out to be.

The White House-brokered deal, which was announced with much fanfare on Aug. 13, is undoubtedly a diplomatic win for U.S. President Donald Trump and for Israel’s prime minister, Benjamin Netanyahu, who declared its signing a “historic day.”

But the United Arab Emirates and Israel have never been at war, so the new agreement between them is not really a peace treaty, as some White House officials and press accounts suggested. It is an agreement to begin officially upgrading relations that have been quietly improving for some time, a process that will probably unfold slowly and tentatively.

Nor is it a deal that helps resolve the long-running conflict between Israel and the Palestinians – the subject of my academic research and recent book. For Palestinians, in fact, the Israeli-Emirati agreement is seen as a major setback, weakening their bargaining position with Israel.

Winners of the Abraham Accords

Until now, the growing Israeli-Emirati relationship has been conducted informally and secretly. It was largely focused on sharing intelligence to counter their mutual enemy, Iran. The new deal, dubbed the Abraham Accords, will bolster this de facto alliance against Iran.

It will also accelerate commercial ties between the two nations, which have already begun to develop in recent years. Economic and technological cooperation between Israel and the United Arab Emirates – an important economic center in the Gulf region – can now take place publicly and expand into more areas.

Scientific cooperation, especially around the COVID-19 pandemic, will also commence, as will tourism. Both Israel and the Emirates will undoubtedly benefit from their growing relationship.

White House and Israeli officials hope that the agreement will also encourage other Arab states in the Gulf to upgrade their own relations with Israel, with Bahrain and Oman the most likely to follow the Emirates’ lead. Both countries have expressed their support for the agreement.

Saudi Arabia, the most important Gulf Arab state, however, has been conspicuously quiet about the deal. Due to their desire to lead the Sunni Muslim world and their typically cautious foreign policy, the Saudis seem unlikely to normalize their relationship with Israel unless major progress is made towards resolving the Israeli-Palestinian conflict.

The agreement relates to that conflict by preventing Israel from implementing its pledge to unilaterally annex parts of the West Bank, an Israeli-occupied territory that the Palestinians claim as their land.

Losers of the Abraham Accords

The Emiratis demanded that concession from Israel in return for normalizing relations. But it’s far from clear that the Israeli-Emirati agreement will help the prospects for peace between Israel and the Palestinians.

For one, Israel analysts question whether Prime Minister Netanyahu really intended to carry out his election campaign promises to annex some of the West Bank, especially in the midst of an economic and health crisis. Israel is now confronting its second wave of the coronavirus. Annexation, which would be illegal under international law, also faced domestic, American and international opposition.

President Trump has declared annexation “off the table” as a result of the United Arab Emirates deal. But Netanyahu claims it is postponed.

Palestinians say it makes little difference to them whether Israel has called off or merely paused its official annexation of West Bank territory. Either way, some 2.8 million Palestinians in the West Bank will continue to live under Israeli military rule alongside an ever-growing population of Jewish settlers, now numbering more than 430,000.

Israel has been building its settlements in the West Bank since it conquered the territory in the 1967 war. Palestinians and many observers see the relentless expansion of Jewish settlements as amounting to Israel’s “creeping annexation” of West Bank land.

This process will continue despite the deal. It could even accelerate if Netanyahu tries to appease Jewish settlers, who feel betrayed by his suspension of annexation.

‘Sold out by your friends’

The divided, fractious leadership of the Palestinians has unanimously denounced the agreement. They describe it as a “stab in the back” for the United Arab Emirates to break from the Arab consensus not to normalize relations with Israel until it makes peace with the Palestinians. In practice, that would mean withdrawing from the West Bank and allowing a Palestinian state to be established.

Now, Israel has achieved normalization with an important Arab state without making any territorial concessions to the Palestinians. Palestinians fear that gives Israel less incentive to ever leave the West Bank. That’s especially true if other Arab allies tire of supporting the Palestinian cause, and opt to forge relations with Israel based upon their own interests, as the Emiratis have done.

“May you never be sold out by your ‘friends,’” Hanan Ashrawi, a veteran Palestinian politician, tweeted in reaction to the agreement.