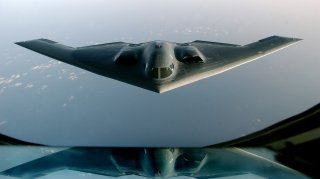 Here's What You Need to Know: The Spirit procurement was first reduced to seventy-five, then cut to twenty by the Bush administration in 1992. An additional B-2 prototype was converted to operational status under Clinton, for a total of twenty-one. This caused the B-2’s half-billion dollar unit price to surge to $737 million—or $929 million counting spare parts, upgrades, and technical support. With development factored in, the Spirits come out to $2.1 billion—by far the most expensive airplane ever built.

The Spirit procurement was first reduced to seventy-five, then cut to twenty by the Bush administration in 1992. An additional B-2 prototype was converted to operational status under Clinton, for a total of twenty-one. This caused the B-2’s half-billion dollar unit price to surge to $737 million—or $929 million counting spare parts, upgrades, and technical support. With development factored in, the Spirits come out to $2.1 billion—by far the most expensive airplane ever built.

All but one test aircraft serves today with the 509th Bomb Wing based in Whiteman Air Force Base, Missouri, a unit descend from the group which dropped two nuclear bombs on Japan. The Spirits are flown by an elite corps of around eighty pilots who often fly globe-spanning missions directly from Whiteman, though B-2s have also been forward based at Diego Garcia in the Indian Ocean, Guam, and England.

The B-2 was the first plane to use GPS-guided JDAM bombs marking a turning point in aerial warfare towards the widespread use of cheaper precision-guided weapons. However, the war also illustrated that greater precision didn’t help if intel failed to distinguish targets correctly. A Spirit dropped five JDAMS on the Chinese embassy, wrongly identified as a weapons depot by the CIA, killing three and causing serious diplomatic fallout.

Furthermore, each Spirit requires a special extra-wide $5-million air-conditioned hangar to maintain its radar-absorbent coating. And every seven years, the Spirits receive a $60 million overhaul, in which the RAM is carefully blasted off the skin with crystallized wheat starch and the surfaces meticulously inspected for tiny dents and scratches.

The B-21 very much resembles a Spirit 2.0, and will incorporate more cost-efficient radar-absorbent materials baked into the skin of the airframe and networked computers for sensor fusion with friendly forces, allowing it to double as a surveillance platform.