Why America Gave Up on its NB-36 Nuclear-Powered Bomber 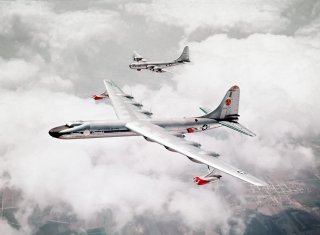 While nations like Russia continue to struggle with fielding nuclear-propulsion in missiles, the United States was already testing a nuclear-powered bomber all the way back in 1955, in the form of the massive Convair NB-36 Crusader.

The bomber carried a 1-megawatt, air-cooled nuclear reactor that hung on a hook inside its cavernous weapons bay that had to be lowered through the bomb bay doors into shielded underground facilities for storage between flights. Believe it or not… it only gets crazier from there.

In theory, a nuclear-powered bomber could literally stay airborne for weeks at a time (if not longer) and could reach any target on the planet without the need to land or refuel. Today, in the era of intercontinental ballistic missiles with truly global reach and submarine-launched ballistic missiles that can be fired from 70% of the globe, keeping a bomber in the sky for weeks on end seems ludicrous, but for a good portion of the Cold War (specifically from 1960 to 1968), that’s exactly what America did.

Operation Chrome Dome and similar efforts saw the United States keep three nuclear-armed B-52s on alert status 24 hours a day, flying routes over the Atlantic Ocean, the Mediterranean Sea, and the Pacific near Alaska. A nuclear-powered bomber carrying nuclear weapons could do the same with less logistical support and would only need to land or be resupplied for the sake of the crew. In the early 1950s, such a bomber would have been an absolute game-changer.

Based on the B-36 Peacemaker

The B-36 may have been a Cold War bomber that went out of service before the end of the 1950s, but in terms of sheer scale, this massive bomber has no equal to this very day. With a 230 foot wingspan, the B-36 still holds the title for longest wingspan of any combat-coded aircraft. Its wingspan was so big, in fact, that you could lay a B-52 Stratofortress’ wings over the B-36’s and still have room to throw a Super Hornet on the end for good measure. Those dimensions are impressive today, but it’s important to remember that when the B-36 first entered into service in 1948, America would still be flying the B-29 for more than another decade.

The Peacemaker’s name was derived from what the bomber was specifically designed to do: hold a nuclear gun to the world’s head. With a 10,000 mile range, the B-36 could depart from American airstrips and deliver 86,000 pounds of nuclear hellfire to targets on other continents. For modern context, that’s 15,000 pounds more than America’s current go-to nuclear bomber, the B-52. ICBMs were being developed during the B-36’s tenure, but during its short operational lifespan, America’s mighty Peacemaker was seen as the world’s ultimate method of nuclear weapon delivery.

Propelling the massive B-36 across the Atlantic ocean was the responsibility of six Pratt & Whitney 3600 hp, R4360-53 radial piston engines working in conjunction with four General Electric 13,500 lb thrust J47-19 turbojets. That coupling of radial piston engines and turbojets gave it a top speed of 435 miles per hour and its aforementioned spectacular range and payload capabilities.

But Russia’s first atomic bomb test in 1949 had put the United States on notice. It was no longer the undisputed nuclear heavyweight it had been for the previous four years. America needed a powerful and attention-grabbing new weapon that would assure its dominance over the Soviet Union and any other potential threats on the horizon. It was with that aim that the Nuclear Energy for the Propulsion of Aircraft (NEPA) project and subsequent Aircraft Nuclear Propulsion (ANP) program were born.

How do you make a nuclear-powered bomber go?

Related: THIS IS WHAT AN F-35 LOOKS LIKE WHEN IT DROPS A NUCLEAR BOMB

You can’t simply hook a nuclear reactor up to the B-36’s existing radial piston and turbojet engines, so fielding a nuclear-powered bomber meant some significant modifications to a standard B-36 airframe. But Uncle Sam wasn’t in a hurry to give up a perfectly good strategic bomber for the experiment. An opportunity arose, however, in 1952, when a tornado struck Carswell Air Force Base in Texas. Among the damaged vehicles and facilities was a B-36 that would need significant repairs to re-enter service. Convair suggested using the airframe for nuclear propulsion testing, rather than rehabbing it back into operation, and the Air Force agreed.

Before concerns about actually propelling a bomber with nuclear power could be addressed, Convair and the Air Force had to confirm two things. First, they needed to find a nuclear reactor that could meet the aircraft’s power output needs and fit within the bomber’s middle weapons bay. Second, they had to make sure that the reactor wouldn’t irradiate the crew during their long-duration bombing flights.

In an effort to find a reactor that would work in a nuclear-powered bomber, the Air Force began testing them, alongside power conversion methodologies, as early as 1944.

Eventually, a system called the HTRE-3 was chosen, thanks in part to its ability to easily transition between chemical propellent and nuclear power. That meant the system could take off and land using chemical fuels and then, once the reactor was at proper operating temperature in the flight, switch over to nuclear propulsion for the long haul. This redundancy made the aircraft more reliable, but was largely due to concerns about mishaps during take-off and landing.

The reactor weighed in at a whopping 35,000 pounds, and rather than being firmly fastened to the bomber’s fuselage, it was hung on a hook in one of the aircraft’s bomb bays. While seemingly unusual, this approach allowed crews to disconnect and lower the reactor into shielded underground facilities for safety in between test flights.

The reactor would power four GE J47 nuclear-converted piston engines generating 3,800 hp, which were then augmented by four additional 23.13 kn turbojet engines that produced 5,200 lbs of thrust. The HTRE-3 was a direct-cycle system that pulled air into the compressor of the turbojet and through a plenum and intake that led to the core of the reactor where the air served as coolant. From there, the super-heated air would travel into another plenum that led to the turbine section of the engine before exiting as exhaust out the back.

How do you make a nuclear-powered bomber safe to fly in?

In order to keep the crew safe, reactor shielding made out of cadmium, paraffin wax, beryllium oxide, and steel were devised, but the shielding proved ineffective in testing, so a new approach that coupled layers of protection on the reactor with additional protective layers on the crew cabin was developed. This approach, dubbed Shadow Shielding, not only worked better, it ended up being significantly lighter.

But that wasn’t the end of the crew protection. Perhaps the biggest structural change to the B-36 was the swapping out of the entire crew and avionics cabin in favor of a huge lead and rubber-lined compartment designed for a pilot, copilot, flight engineer, and the addition of two onboard nuclear engineers. Windows in the crew cabin were a foot thick in some places and made out of lead glass to protect against any possible radiation exposure.

The crew compartment was so well shielded that you could barely hear the engines running from inside, prompting many to liken flying the nuclear-powered bomber to operating a submarine. It measured slightly shorter than the original crew cabin, and after its installation, the nose landing gear was adjusted six inches forward to create more room for an escape hatch.

All told, the new crew compartment weighed in at an impressive 12 tons. The rear cabin was not intended to house crewmembers, so cameras and an internal CCTV system were installed to visually monitor the reactor and its mated systems.

In order to capture any radiation that might escape from the aircraft as it flew, water tanks were added to the bank. Water absorbs radiation thanks to its hydrogen-rich composition, making it a cheap and effective means of radiation shielding. However, it’s not the lightest material for the job, so it tends not to see use in aviation or space applications. In a bomber with the huge payload capabilities of the B-36, however, water tanks were no problem.

With the new cabin and extensive modifications to the weapons bay in order to house the reactor, the burgeoning nuclear-powered bomber was different enough from the original Peacemaker to earn an entirely new designation. And just like that, the NB-36 Crusader, what was to be America’s first-ever nuclear-powered bomber, was born.

Because the HTRE-3 propulsion system was designed to function under chemical power before and after leveraging its nuclear reactor, the system was perfectly suited for test flights that relied entirely on that chemical fuel while testing the reactor’s operation in flight.