Why America Never Sold the F-22 Raptor to Foreign Countries 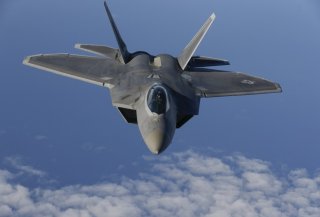 The F-22 Raptor is widely touted as the world’s most capable air superiority fighter jet. As a 5th generation stealth aircraft, the F-22 packs some incredible technologies in a highly maneuverable supersonic platform.

But it is also a very strange aircraft in certain regards. Despite being the best in its role, the Pentagon decided to buy only 186 aircraft out of the intended 750. Furthermore, Congress shut the door to any prospective buyers, forbidding Lockheed Martin, the manufacturer, from ever selling the aircraft abroad.

But how could an aircraft that is so good at its job get shut down so quickly into production? And why couldn’t the U.S. sell it to the many foreign buyers who were rushing to purchase it?

The F-22 Raptor: A great aircraft

Introduced in 2005, the F-22 Raptor was intended to replace the venerable F-15 Eagle as America’s next air superiority fighter jet that would last well into the 2040s.

As an air dominance, multi-role fighter, the F-22 was the first 5th generation stealth fighter jet to fly. It combines advanced technology, such as stealth, sensor fusion to produce superb situational awareness, and an airframe that is highly maneuverable and can supercruise, or fly at supersonic speeds without the use of afterburners.

What makes the F-22 great in a dogfight is the aircraft’s thrust vectoring capabilities. Its two engines have specially designed nozzles at their ends that can move on a vertical plane to vector the aircraft’s 70,000 pounds of thrust in one direction even if the aircraft is heading in another, thus allowing the F-22 to do some impressive acrobatics, as well as leverage an extremely high angle of attack during a within-visual-range engagement (a dogfight).

The F-22 is quite versatile when it comes to the armament it can carry.

For a combat air patrol, the Raptor can carry two AIM-9 Sidewinder heat-seeking air-to-air missiles and six AIM-120 AMRAAM radar-guided missiles. For close air support or precision strike mission, the F-22 can carry two 1,000 pounds GBU-32 JDAMs or eight 250 pound Small Diameter Bombs, in addition to pairs of both AIM-9s and AIM-120s. In all of these loadouts, the aircraft’s M61A2 20-millimeter cannon with 480 rounds ensures a fearsome foe in dogfights.

Equally important, it can carry all the aforementioned munitions within its three internal weapons bays, meaning that the aircraft doesn’t sacrifice any stealth to carry all that firepower. In comparison, America’s other stealth fighter jet, the F-35, can only carry only four weapons in its two internal bays.

With an operational ceiling of 50,000 feet and a range of almost 1,900 miles (with two external fuel tanks that would limit its stealth capabilities), the F-22 can fly at speeds above Mach 2.

Despite the aircraft’s great characteristics, the F-22 program was short-lived. As in many cases involving humans, and as Mark Knopfler of the Dire Straits famously quipped, it seems it was that the timing was wrong.

The F-22 Raptor: An Unlucky Aircraft

The F-22 entered service at a time when the U.S. military was fighting a two-front war with seemingly no end, against an irregular enemy in Afghanistan and Iraq.

As the Pentagon was pouring trillions into the Global War on Terror (GWOT), the F-22’s air superiority and stealth attributes went wasted against an enemy that could hardly dress its troops in the same uniform, let alone field fighter jets or advanced surface-to-air missile systems or radar.

But while utility attracts money, current threats determine utility. And in that regard, the F-22 Raptor must be one of the “unluckiest” aircraft of all time because, despite its phenomenal capabilities, it came into service at a time when there was no enemy for it to fight, despite the nation having no shortage of enemies.

Of the 186 F-22 Raptors delivered to the Air Force, only about 130 were ever operational. As a result, today, the Raptor is a bird facing extinction. Although current operational numbers are classified, it wouldn’t be irrational to assume that fewer than 100 F-22s are combat-ready at any given time, and every time a Raptor flies, it’s one less time it will fly in the future because of the lack of spare parts.

Sorry, it’s not for sale

Over the years, Israel, Japan, and Australia had repeatedly asked the Pentagon about potential purchases of the F-22 Raptor, but every time they were shot down. In 1998, Congress even voted for an amendment that explicitly forbids the sale of F-22 Raptors to foreign nations.

Unlike the vast majority of U.S. military aircraft, the F-22 was never designed to be exported. As such, it was packed with classified technology and produced through advanced production methodologies that the United States would rather keep close to the chest. To date, the U.S remains the leader in stealth aviation technologies the world over.

China and Russia are always eager to steal technology from the U.S. to advance their own military and private industries. And they have repeatedly succeeded in doing so, perhaps most notably when China used cyber espionage and an insider source to get a hold of the F-35, F-22, and C-130 blueprints in 2016.

And exports of military aircraft have backfired in the past. Iran is still flying the American-made F-14 Tomcats the Shah had bought before the Iranian revolution, while Communist Venezuela protects its skies with American-made F-16s it bought in the 1980s. China’s highly capable J-10 fighter was largely based on America’s own F-16 after the U.S. exported related technologies to Israel, only to have their Lavi fighter program dissolve, at which point Israel sold those technologies to China.

But despite these concerns, the Department of Defense still entertained the idea of selling it abroad.

According to the War Zone, which managed to get a redacted copy of the Air Force’s F-22 Raptor export feasibility project through the Freedom of Information Act (FOIA), the Pentagon did entertain the idea of exporting its most advanced fighter jet at the time.

Several Air Force offices conducted studies with different variables on what such an export program would look like.

But, bottom line, Congress never authorized the money to fund an export version of the F-22. And foreign suitors were already eyeing another, even more expensive, project: The F-35.