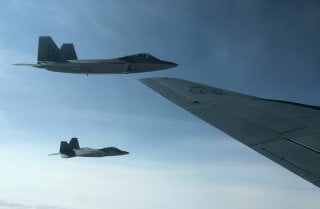 Here's What You Need To Remember: Stealth technology works by engineering an aircraft with external contours and heat signatures designed to elude detection from enemy radar systems. The absence of defined edges, noticeable heat emissions, weapons hanging on pylons or other easily detectable aircraft features, means that radar "pings" can have trouble receiving a return electromagnetic signal allowing them to identify an approaching bomber.

Kris Osborn of Warrior Maven previously served at the Pentagon as a Highly Qualified Expert with the Office of the Assistant Secretary of the Army - Acquisition, Logistics& Technology. Osborn has also worked as an anchor and an-air military specialist at national TV networks. He has a Masters Degree in Comparative Literature from Columbia University.