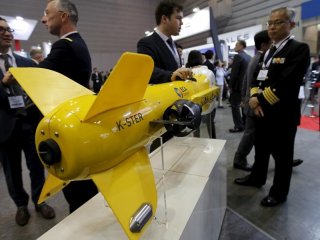 Here's What You Need to Remember: Then there is the question of whether America can even produce the components it needs to build smart bombs. Like many American products, PGMs use some foreign-made parts that are vulnerable to embargo or being tampered with.

Since the 1980s, smart bombs have become the wonder weapons of modern warfare. One laser- or GPS-guided bomb can hit a target where a dozen dumb bombs from a World War II bomber would have missed.

But precision-guided munitions, or PGMs, don’t do much good if you don’t have enough of them.

“Current operations have demonstrated a large demand for all types of PGMs,” warns a report by the Congressional Research Service, which is Congress’s research arm. “A potential high-intensity conflict would potentially require large stockpiles of all types of weapons. Several of these types of munitions—particularly JASSM, LRASM, and AARGM—are being procured in relatively small quantities, given their potential use rates in a high-intensity conflict scenario, along with the time it would take for replacement spent munitions once initial inventories are exhausted.”

The Joint Air-to-Surface Standoff Missile (JASSM) is a cruise missile carried by B-2, B-1 and B-52 bombers, as well as F-15E and F-16 fighters. Costing about $1 million apiece, JASSM is designed to enable strike aircraft to destroy targets while keeping safely out of range of enemy air defenses. The Long Range Anti-Ship Missile (LRASM) is an anti-ship missile launched from aircraft and surface ships, that costs about $3 million each. The Advanced Anti-Radiation Guided Missile (AARGM) is an upgraded AGM-88 High Speed Anti-Radiation (HARM) missile, which homes in on enemy radar sites. All three would probably be used intensively during a conflict against an adversary possessing sophisticated air defenses and naval forces.

The CRS report coincides with a British study last month that warned that British ground forces would be overwhelmed by Russian artillery during a conflict in Eastern Europe. While Britain and NATO rely on air-launched PGMs, of which there is a limited number, Russia retains a huge arsenal of howitzers and battlefield rockets that make up in quantity what they may lack in precision.

The pace of PGM acquisitions is also slow. “China and Russia have developed sophisticated systems over the past 10 years, while DOD has developed relatively few systems,” CRS warns. “Some analysts argue that these systems can exceed DOD munitions capabilities (such as range and speed). Can and, if so, should DOD develop new systems and at a pace that can match or exceed that of Chinese or Russian weapons systems?”

Yet even if the Pentagon wants more smart bombs, the U.S. defense industry may not be able to provide them. “Another potential issue for Congress concerns the defense industrial base’s capacity for building PGMs, particularly for meeting increased demands for such weapons during an extended-duration, high-intensity conflict. The question is part of a larger issue of whether various parts of the U.S. defense industrial base are adequate, in an era of renewed great power competition, to meet potential wartime mobilization demands.”

Then there is the question of whether America can even produce the components it needs to build smart bombs. Like many American products, PGMs use some foreign-made parts that are vulnerable to embargo or being tampered with.

Finally, while smart munitions are invaluable—better to expend a million-dollar missile than risk a $100 million aircraft—CRS asks whether there is always value for money. “For instance, in 2017 a U.S. ally used a $3 million Patriot missile to engage a $300 quadcopter drone,” the report notes.