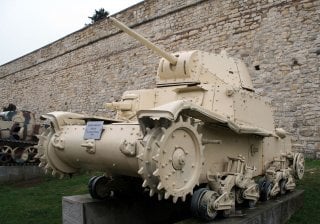 Here's What You Need to Remember: In a showdown at Piombino, M15/42 tanks of the XIX battalion sank a German gunboat and damaged a second. In Rome, the Ariete II division—reconstituted with forty M15/42s and 157 Semovente guns, including a powerful new variant with 105-millimeter howitzers—battled the German 3rd Panzergrenadier Division for two days before surrendering.

On the morning of November 19, 1941, General John Scott Cockburn decided to launch his 22nd Armored Brigade into a frontal attack on the forces of the Italian 132nd Ariete Armored Division arrayed in Bir el Gubi in south eastern Libya.

Earlier that year in battles at Bardia and Beda Fomm, inexperienced Italian tank formations had repeatedly foundered battling British armor and artillery positions, as described in a companion article. Cockburn expected that a show of force from the tanks of the 22nd Brigade, outfitted with 150 brand-new Crusader I cruiser tanks, would set the “Eye-ties” to flight. He saw no need to wait for infantry support.

That would allow him to swing the 22nd Brigade to the north and join forces targeting the German Afrika Korps under General Erwin Rommel as part of Operation Crusader.

But at 1:30 p.m., as Crusaders bogged down before Italian mines and Bersaglieri,  around sixty M13/40 tanks of the 32nd Armored Regiment counterattacked. A swirling armored duel broke out over the open desert, with one side flanking the other only to be flanked in turn by formations in the wings.

The Crusaders and M13/40s were both vulnerable to each other’s two-pounder (40 millimeter) and 47-millimeter guns. The latter weapon had proven hopelessly ineffective against the thick armor of Matilda II heavy tanks at Bardia, but could readily penetrate lightly armored British cruisers.

Soon columns smoke began rising into the sky as tanks “brewed up,” leaving surviving crew scrambling desperately to escape their burning vehicles. You can see the action in this propaganda recording.

By 4:30 p.m., the brigade’s three tank regiments withdrew one by one, leaving behind forty-two or fifty-two burning Crusaders and thirty-four M13/40s on the battlefield. The Afrika Korps was left to face one less British armored brigade.

Bir-el-Gubi revealed Italian tankers had improved considerably in proficiency, and could hold their own given adequate forces and equipment. But those circumstances seldom aligned for Italian ground forces.

For example, Mussolini impetuously committed 235,000 Italian soldiers of the 8th Army to support the Nazi invasion of the Soviet Union. These were supported by seven-ton L6/40 light reconnaissance tanks and Semovete 47/32 assault guns, mechanically sound designs that was absurdly under-gunned when facing the Red Army’s numerous and robust T-34 tanks.

A large part of the Italian forces guarding German flanks on the East Front were swept away in the winter of 1942/1943 in the opening phase of the Soviet double-envelopment (Operation Saturn) that fatefully encircled the German 6th Army in Stalingrad.

Meanwhile in North Africa, by mid-1942 Italian M13 and M14 tanks were decisively outclassed by new Grant, Crusader III and Sherman medium tanks entering British service. The better armored M15/42 with a higher-velocity gun only began to enter service in 1943.

In truth, Italy’s finest armored vehicles at the time were its Fiat-Ansaldo Autoblinda armored scout cars with newfangled four-wheel drive transmission, and more importantly, its self-propelled artillery mounting heavier guns and armor on the turretless hull of a tank.

M13 and M14 tank hulls were converted to Semovente 75/18 armed with howitzers that could readily penetrate Allied tanks with shaped-charge HEAT shells. More potent weapons were later mounted on the hull of the M15/42 tank, resulting in the longer-barreled Semovente 75/34 and Semovente 90/53 with a powerful 90-millimeter anti-aircraft cannon that could ‘snipe’ tanks over considerable distances from mountain tops in Sicily and Italy.

The potent self-propelled artillery allowed the 132nd Ariete armored divisions to hold out a surprising twelve days in the cataclysmic Second Battle of El Alamein before overwhelming British armored forces finally encircled and destroyed its last six vehicles.  Rommel praised the valor of the Italian armored units he sacrificed in doomed-rear guards actions at El Agheila and the Mareth Line to buy time for German forces to escape.

Later, at the infamous battle of the Kasserine Pass, twenty-two M14/41 tanks and Semovente 75/18s of the 131st Centauro Armored Division broke through American infantry on Highway 13 in Tunisia (combat footage here)—only to be overrun a month later American infantry at El Guettar and compelled to surrender in May.

The Allies next set their sights on Sicily. In the Battle of Gela in Sicily, the Livorno Mountain Division mustered thirty-eight antiquated Fiat 3000 tanks and several battalion of Semovente self-propelled guns in mobile groups, which attempted to overrun freshly landed American infantry and paratroopers.  But bazookas, anti-tank guns, and even naval gunfire, stopped the Italian counterattacks in their tracks.

On September 8, 1943, Italy announced an armistice with the Allies. Unfortunately, the Nazis were prepared and moved rapidly to seize control of the northern two-thirds of Italy. As a result, Italian tankers saw one last flurry of action.

In a showdown at Piombino, M15/42 tanks of the XIX battalion sank a German gunboat and damaged a second. In Rome, the Ariete II division—reconstituted with forty M15/42s and 157 Semovente guns, including a powerful new variant with 105-millimeter howitzers—battled the German 3rd Panzergrenadier Division for two days before surrendering.

The Germans went on to appropriate hundreds of Italian armored vehicles and even continued factory production of new units. By then Ansaldo had just begun production of the twenty-right-ton P26/40 tank, influenced by a captured a Soviet T-34. The P26/40 boasted 60 millimeter of heavily sloped (though still riveted) armor and a medium-caliber 75-millimeter gun, putting it roughly on par with early American Sherman medium tanks in terms of protection and firepower. The 103 were built and all commandeered for both training and combat roles by the Wehrmacht.

Though Italian soldiers fought on with both the Fascist Italian Social Republic (RSI) and the Allied Co-Belligerent Forces, the former ended up operating whatever armor the German’s hadn’t already nabbed.

Mussolini entered Italy into World War II with a deeply inadequate industrial base to match global powers like the United Kingdom. This problem was worsened by atrocious operational-level generalship and an early overreliance on outdated technologies.

Despite these disadvantages, Italian tank units improved steadily in proficiency, and armored vehicle design improved markedly in mobility, firepower and protection. However, that was far too late to reverse the fortunes of Mussolini’s Italy.

This article first appeared in February 2020 and is being reprinted due to reader interests.