Why Are People So Mad at Police? 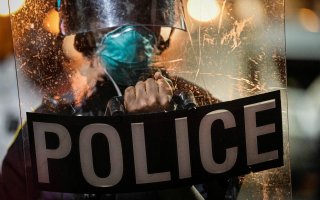 Unless you've been hibernating this year (for which you could hardly be blamed), you've probably noticed that some people are really angry at cops these days, whereas other people—mostly conservatives and members of law enforcement—are mystified by this and consider the anger almost entirely misplaced. As explained below, I think the anger is largely justified, but for reasons that do not receive as much attention as they should. Perhaps it boils down to the simple fact that it is immoral to enforce morally indefensible laws. Here's what I mean by that.

Police represent the front line of our criminal justice system. If, as I have argued here before, that system is fundamentally rotten and in certain respects morally indefensible, then people will naturally direct their ire towards those most responsible for dragging people into it. Human beings come hardwired with various cognitive biases and moral intuitions. Among the most powerful of those is the tendency to condemn those who violate certain taboos, including particularly the rule against harming other people without sufficient justification. If a strong case can be made that police officers regularly transgress fundamental moral precepts—while disclaiming any responsibility for doing so—then continued loss of confidence and corresponding anger towards them becomes much easier to understand.

Before considering whether people are legitimately angry at police as an institution, we should keep two points in mind. First, people who behave immorally don't get a free pass simply because they also do good. In other words, just because you invented the polio vaccine doesn't mean it's OK to steal candy from children whose lives you saved. Second, people don't have to be unequivocally right in order to be justifiably angry. Consider studies from last year that reviewed cops' Facebook pages and found a shocking amount of explicitly racist commentary. While that certainly doesn't support the proposition that most cops are racists, it raises perfectly valid questions about why the system seems so tolerant of people who express those views and why they're not hounded out of the vocation by their fellow officers.

So, is it reasonable to perceive that police too often violate the moral precept against harming other people without sufficient justification? Unfortunately, the answer is plainly yes. And that's not all. Besides inflicting unjustifiable harm, police are widely perceived as being frequently deceitful and unwilling to take responsibility for their misdeeds—more taboos that have been universally condemned throughout recorded history. Members and supporters of law enforcement who wish to restore public confidence in and esteem for police should stop dismissing these perceptions out of hand and instead consider whether they might have some basis in fact.

1. Harming others without sufficient justification and/or using disproportionate force.

There is a raging debate about how often police violate people's legal rights by using excessive force. Some people claim it happens relatively infrequently and represents only a tiny fraction of interactions between police and the public. Others, myself included, argue that police employ force—including lethal force—far more often than they should, and that it makes little sense to try to calculate the number of times police use excessive force as a percentage of total encounters. Among other things, when the law enforcement community doesn't even keep careful track of how many people they shoot, how on earth could we ever feel confident of either the numerator or the denominator with respect to all uses of force during police encounters?

But we needn't resolve that debate here because there are two other deeply problematic features of modern policing about which the only debate is philosophical, not empirical. These are, first, the use of police to enforce morally unjustifiable laws; and second, the use of police to inflict harm on people that is vastly disproportionate to the magnitude of the wrong (if any) they have done. Both categories of behavior are morally condemnable and American police spend a considerable amount of time doing each.

a. Harming others by enforcing morally unjustifiable laws.

Consider a law that allows children who are deemed to be feeble-minded or mentally defective to be sterilized so they can never reproduce. Even if the Supreme Court upheld that law (which it did in the notorious 1927 case Buck v. Bell), it would still be immoral to help enforce it—whether by tearing children away from their grief-stricken parents, transporting them to state-operated sterilization facilities, defending the policy in court, or by actually performing those procedures oneself. The same is true of a law that purported to authorize the ownership of human beings and required police and other citizens to assist in the capture and return of those who escaped from bondage: It would be immoral to enforce that law even if the courts held that it was constitutionally permissible—as they routinely did before the ratification of the Thirteenth Amendment abolishing chattel slavery in America.

Defenders of our current criminal justice system rarely if ever ask whether any laws on the books today are morally indefensible. Instead, they seem to embrace the idea that: (a) that which is deemed to be legal must also be moral; and (b) people are absolved of any duty to consider the morality of their behavior the moment they put on a uniform or pick up a badge. Both propositions are false, and people who embrace them—whether explicitly, as a matter of conscious choice, or tacitly, by simply not bothering to consider the morality of their official acts—should not be surprised to find themselves condemned by people who disagree.

Lest you think morally indefensible laws are all in the past, consider that until June of last year, it was illegal to wear saggy pants in Shreveport, LA, and police arrested more than 700 people for violating that law—96 percent of them black men. Indeed, the law was only repealed after an officer shot and killed 31-year-old Anthony Childs while trying to stop him for wearing pants below his waistline. Doing violence to another person for wearing saggy pants—whether shooting them dead or just placing them in handcuffs—is an immoral act, even if the government purports to authorize it.

The question then arises whether an act that would be immoral for you to commit as a private citizen necessarily becomes moral simply because the government purports to authorize it. As we have already seen with slavery, eugenics, and saggy pants, the answer is emphatically no. While it's possible that something that it would be immoral for you to do as a private citizen can become morally permissible if you do it as an agent of the state (tax collection comes to mind), there is no automatic free pass. As a result, people in the business of enforcing morally dubious laws—such as prohibitions against certain drugs and any number of voluntary economic transactions—are mistaken if they think they need only point to the existence of a democratically enacted statute or a Supreme Court ruling to justify their behavior. Nor should they be surprised to find themselves scorned by those who condemn the unjustified use of force and who understand—as it appears so many police and prosecutors do not—that "I was just enforcing the law" is no more a morally valid defense than "I was just following orders."

Besides hurting someone without justification, it is also immoral to inflict disproportionate harm, even if the decision to use force was itself legitimate. For example, if I catch you stealing fruit from my apple tree, I can order you off my property and even knock the apples out of your hand if you refuse to drop them; but if you decide to take off with my apples, it would be immoral for me to hop in my car and run you down in order to prevent you from getting away with them. That's the moral concept of proportionate response, and it is another place where American police have been culpable.

Consider marijuana—two-thirds of Americans think it should be legal, and a growing body of research suggests it provides significant relief to people suffering everything from glaucoma and seizures to post-traumatic stress disorder from exposure to combat. Even if one could make the case that it is morally permissible to criminalize the prohibition of various drugs, including marijuana (an increasingly dubious proposition, I believe), the punishment for violating those laws must still be proportionate to the magnitude of the wrong. I suspect nearly everyone these days would agree that it would be immoral to sentence someone to life without parole for growing a single marijuana plant. But what about five years, which is the federal penalty for growing a single marijuana plant or the life sentences some people have received for non-violent marijuana offenses? Good luck convincing their spouses, children, and other loved ones that those punishments were morally justified and reasonably proportional to the magnitude of the wrongdoing.

And it's not just drug laws either. As I noted here recently, police initiate more than 13 million misdemeanor cases every year, for things as trivial as driving without a seatbelt or riding an ATV without a helmet, and every one of those arrests has the potential to destroy a life. That's because the consequences of a misdemeanor conviction (or even just an arrest) can be cataclysmic, not just in terms of the actual sentences (which are are typically served in dirty, dangerous, and now COVID-infested jails), but also because of the exorbitant fines, fees, and court costs upon which many jurisdictions have become increasingly dependent, even though they are far beyond the means of many defendants to pay.