Why Are Strategic Bombers Making A Comeback? Your Enemy Can See Them Coming 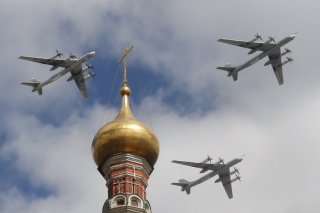 Here's What You Need To Remember: China and the United States want stealth bombers because they can be based far away from the frontline, still cross the huge expanses of the Pacific Ocean, have decent odds of evading sophisticated air defense systems, and could deliver more affordable, shorter-range munitions in larger volumes.

Scutts was making what seemed in 1991 like an obvious point. Strategic bomber fleets were dwindling as the Cold War wound to a close. Congress cut production of $500 million B-2 stealth bombers designed to penetrate Soviet air defense to just twenty aircraft instead of the 132 originally planned. A decade earlier, the U.K. retired its last Vulcan strategic bomber.

Both slower bombers like the B-52, and supersonic aircraft like the B-1 Lancer or Tu-160 appeared less and less survivable due to advancements air defense radar and missiles, yet were extremely expensive to procure and operate. The future seemed to belong to fourth-generation multi-role jets like the F-15E that combined agility and flexibility with considerable loads of precision weapons.

But by 2020, it’s evident that strategic bombers are making a big comeback. The U.S. Air Force will begin building a fleet of a hudred new B-21 Raider stealth bombers in the 2020s and plans to keep seventy-six upgraded B-52s in service into the 2040s.

Russia is upgrading its own sizable fleet of Cold War bombers and is deploying them on long-range patrols more frequently than ever. It’s even conducting joint bomber patrols with China, which continues to develop new models of its old-school H-6 bombers, while promising to unveil its own H-20 stealth bomber in 2020.

Overthrowing the Tyranny of Distance

Why have the big bombers come back to the fore?

First, there’s the reemergence of great power competition, particularly between that playing out between the United States and China over the vast expanse of the Asia-Pacific region. In that theater, strategic bombers can embark on long-distance missions that high-performance tactical fighters simply can’t.

Furthermore, land-based missiles pose a major threat to the forward bases and aircraft carriers used by shorter-range tactical fighters, as demonstrated in a recent strike on U.S. troops in Iraq. China, Russia, and Iran all have invested in large cruise missiles and short-range ballistic missile arsenals. In a war, these would be unleashed in a massive barrage on U.S. airbases and even ships at sea within a thousand miles of their coastline.

Even with anti-ballistic missile defenses, it’s not clear how many short-range tactical fighters would survive such an onslaught. And a stealth fighter on the ground is no harder to kill than conventional aircraft.

Thus, bombers based in the United States, or further forward in Diego Garcia, Guam, and Hawaii, would be much less exposed to attack while still being able to strike targets across the globe. Yes, China and Russia both possess intermediate- and intercontinental-range missiles that could threaten those targets—but the latter carry exclusively nuclear payloads, and there are fewer of the former.

Meanwhile, air-refueled H-6 bombers remain one of China’s few means to launch conventional strikes at ships and bases in the central Pacific Ocean.

But it’s not only the range of the bombers but that of weapons they carry.

As all you need for such a ‘missile truck’ is a large airplane with lots of fuel and weapon carrying capacity, you could basically modify a 737 airliner to do the job. And that’s what appears to be happening as the Navy is outfitting its 737-based P-8 Poseidon maritime patrol planes with bomber-like weapon capabilities.

Long-range bombers armed with anti-ship cruise missiles are also in theory effective for hunting down enemy warships—a role discussed in a companion article.

Now, standoff-attack bombers might still be vulnerable to interception from enemy fighters, particularly those equipped with very-long-range air-to-air missiles like the Russian R-37 or the Chinese PL-15. However, the Air Force is working on self-defense laser turret that may mitigate the threat of low-volume, long-range attacks.

The standoff-strike approach has its downsides. Long-range cruise missiles are highly expensive. Each JASSM around $1 million per shot, depending on model—and the U.S. has repeatedly come close to exhausting its cruise missile stocks when fighting weaker adversaries.

Furthermore, cruise missiles may take an hour or two to reach distant targets, giving competent adversaries decent odds of detecting them, and affording personnel time to bunker down and ready air defenses.

Thus, if you want to unload devastating firepower while still achieving surprise, then you need a very different, ultra-expensive solution: a long-range stealth bomber.

For three decades, the B-2 Spirit was the world’s only operational long-range stealth bombers. But in the 2020s, the Air Force plans on testing and procuring at least one hundred B-21 Raider stealth bombers, though many airpower advocates want an even larger number.

Meanwhile, China is expected to soon unveil an H-20 stealth bomber. Like the B-21, it’s expected to resemble the B-2.

China and the United States want stealth bombers because they can be based far away from the frontline, still cross the huge expanses of the Pacific Ocean, have decent odds of evading sophisticated air defense systems, and could deliver more affordable, shorter-range munitions in larger volumes.

Russia also has a stealth bomber program dubbed the PAK-DA—with a first flight supposedly forecast in the mid-2020s. The coming decade will reveal whether Moscow is ready to invest the huge sums necessary to get the program off the ground, given its continuing difficulties with the Su-57 stealth fighter.

In reality, of course, strategic bombers haven’t been used against a major military power since World War II. Most of the strategic bombers developed by the United States during the Cold War never dropped a bomb in anger. And Russia’s iconic Bear bomber, deployed 1956, wasn’t used in combat until 2016.

Yet heavy bombers still served an important function, as deploying large, nuclear-capable bombers on patrols is seen as particularly intimidating.

Washington deploys B-52s and B-2 bombers to fly by the Korean peninsula when it wants to ramp up pressure on Pyongyang. Moscow delights in dispatching Blackjack bombers to Venezuela and Bears off the coast of England and Alaska to provoke and alarm NATO. And Beijing has pointedly sent H-6 bombers to circle around Taiwan.

While all three countries possess more unstoppable means of deploying nuclear weapons, the bomber’s usefulness comes from its sheer visibility in both nuclear and conventional deterrence.

The United States. has also used heavy bombers in lower-intensity conflicts in Afghanistan, Iraq, and Syria. When fighting adversaries like ISIS that lack high-altitude anti-aircraft missiles, B-1s and B-52s have flown high overhead, picking off targets designated by ground forces with affordable JDAM glide bombs. A single bomber heavily laden with fuel and weapons can do the job of multiple fighter sorties as it loiters over a battlefield for hours upon hours.

The above factors explain why China, Russia, and the United States are both maintaining substantial fleets of old Cold War bombers while also investing tens of billions of dollars in developing new stealth bombers. One can only hope the newly prominent bomber fleets never have occasion to be used in the kind of superpower slugging match they were designed for.

Sébastien Roblin writes on the technical, historical and political aspects of international security and conflict for publications including The National Interest, NBC News, Forbes.com and War is Boring. He holds a Master’s degree from Georgetown University and served with the Peace Corps in China. You can follow his articles on Twitter. This article first appeared earlier this year.