Why are These Five Decade-Old U.S. Nuclear Bombs Still in Turkey? 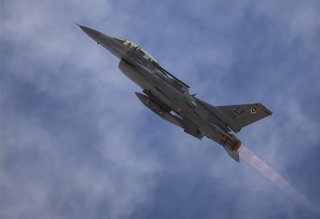 One of the longest-serving nuclear weapons in America’s arsenal is the B61 nuclear free-fall bomb. The B61 bomb was first introduced in 1966 with more than three thousand bombs produced to date. The bomb is famous for its adjustable yield capability, giving it the versatility to operate in both the tactical and strategic nuclear roles. The United States forward deploys many of the bombs in Europe, with up to fifty bombs currently maintained at Incirlik Air Force Base in Turkey.

In 1960, Sandia National Laboratory and Los Alamos Scientific Laboratory began development of a new nuclear free-fall bomb. The bomb, nicknamed FUFO (full fuzing option), would be capable of adjusting its explosive yield to the mission, high-speed or low-speed delivery, high altitude or low altitude delivery, and airburst or contact burst fuzing capability. Each B61 is 11.8 feet long, 13 inches wide and weighs approximately 700 pounds. (The B61-11, an earth-penetrating version of the bomb, weighs an extra 450 pounds.)

The bomb has several deployment techniques depending on the nature of the target. These including free-fall airburst, a parachute-retarded airburst, a free-fall surface burst, or a “laydown” from a low-flying aircraft that involves the use of a kevlar drag parachute to quickly slow the bomb to safe impact speed. Free-fall airburst, for example, could be used by a strategic bomber against an undefended target. Low-altitude laydown could be utilized by tactical aircraft such as an F-16 Fighting Falcon flying a nuclear bombing mission against ground forces guarded by alert air defenses.

Between 1966 and 1997 the U.S. government built 3,155 B61 bombs of all types, both strategic and tactical. Most of these bombs are dismantled or inactive. A 2019 assessment by the Bulletin of the Atomic Scientists estimates the U.S. Air Force has 322 strategic nuclear bombs actively deployed, including the B83, B61-7 and B61-11 bombs. Exactly how many of these bombs are B61 is not clear, but the B83 with a 1.2 megaton yield is the largest thermonuclear bomb in the U.S. inventory and likely makes up a minority of the strategic bombs.

Even fewer B61 tactical bombs are on active deployment. The BOAS estimates the Air Force deploys 230 tactical versions of the B61 bomb, B61-3 and B61-4, with 160 in Western Europe and Turkey. The Federation of American Scientists assesses twenty B61-3/4s at Kleine Brogel Air Base in Belgium, twenty at Buchel Air Base in Germany, twenty at Aviano Air Base and twenty at Ghedi Air Base in Italy, twenty at Volkel Air Base in The Netherlands, and fifty at Incirlik Air Base in Turkey. Experts believe the remainder are in storage at the sprawling Kirtland Underground Munitions and Maintenance Storage Complex (KUMMSC) outside Albuquerque, New Mexico.

Only a handful of aircraft can carry the B61 bomb. At the strategic level, only the B-2A Spirit is capable of carrying the B61-7 or B61-11, with the B-52H recently delisted from the nuclear bomb dropping role. (The B-52H still carries nuclear-tipped cruise missiles.) At the tactical level, experts believe some bombs are reserved for U.S. pilots and planes while others are reserved for the countries hosting the bombs. The designated NATO delivery aircraft for tactical nuclear bombs are F-15E Strike Eagle fighters, F-16 Fighting Falcons, and Panavia Tornado strike jets.

The B61 series of bombs is famous for its full fuzing option capability, otherwise known as “dial-a-yield”, which allows handlers to adjust the explosive yield of the device to suit the mission. The B61-3 tactical bomb is adjustable to .3 kilotons (the equivalent of just 300 tons of TNT), 1.5 kilotons, 60 tons, or 170 kilotons. The B61-4 is adjustable to .3 kilotons, 1.5 kilotons, 10 kilotons, or 50 kilotons. The smaller yields are particularly suited to destroying formations of enemy armored vehicles, command posts, supply depots, and other such targets. The B61-7 strategic bomb has four yields ranging between 10 and 350 kilotons, while the B61-11 hardened target penetrating bomb has a yield of 400 kilotons.

As nuclear weapons, the B61 series of bombs incorporates a number of safety mechanisms designed to prevent unauthorized use. Nuclear capable aircraft include Aircraft Monitoring and Control (AMAC) computers that interface with the bomb itself, providing safing, arming, and fuzing functions. The AMAC also allows the pilot to input the Permissive Action Links code arming the bomb. The code itself is six to twelve digits long with a limited number of input tries built-in before the user is locked out. The bombs feature environmental safety devices that prevent detonation if, for example, the bomb fails to detect itself free-falling—as expected—from an aircraft. Finally, U.S. nuclear weapons are built to resist tampering and often require specialized tools, a means of slowing down unauthorized disassembly.

The U.S. government is currently working on yet another B61 series bomb, the B61-12. The B61-12 is designed to replace both tactical nuclear versions of the bomb and the B61-11 penetrating bomb. The B61-12 will have a dial-a-yield of 0.3, 1.5, 10, or 50 kilotons and replace all previous versions but the B61-7 bomb. The B61-12 has improved ground-penetrating capabilities giving it the explosive power of a surface detonation exponentially greater than the bomb’s actual yield. A new guided tail fin assembly is estimated to give the bomb a circular error probable, or the radius of a circle in which half of the bombs are expected to fall, of just 30 meters. Critics contend that the weapon is unnecessary and with a smaller yield is more likely to be used.

At 52 years and going strong, the B61 series of bombs are likely the oldest serving nuclear weapons in the U.S. arsenal. Their versatility in nuclear warfare, from theater to strategic, is unmatched. While the desirability and even utility of nuclear weapons is certainly open to debate, acceptance of a nuclear deterrence strategy necessitates some form of nuclear gravity bomb. For now, that bomb is the B-61.

Kyle Mizokami is a defense and national-security writer based in San Francisco who has appeared in the Diplomat, Foreign Policy, War is Boring and the Daily Beast. In 2009, he cofounded the defense and security blog Japan Security Watch. You can follow him on Twitter: @KyleMizokami. This first appeared in 2019 and is being republished due to reader interest.