Why the Army Was Obsessed With These 5 Wonder Weapons 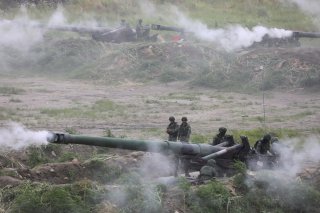 Here’s What You Need to Remember: The United States spent $610 billion in 2018 on defense, roughly one-third of all military spending on the planet—but that doesn’t mean that money is always being used efficiently. Over thirty years, the U.S. Army has engaged in two long-term wars and several briefer ones without replacing the major weapon systems which entered service in the 1970s and 80s.

Another Cold War concept was the procurement of an agile and stealthy scout helicopter to replace the Bell Jetranger-derived OH-58D Kiowa Warrior that was employed for reconnaissance and light attack duty.

Boeing and Sikorsky produced two lithe, Cobra-like prototypes with faceted surfaces and radar-absorbent material coating that significantly reduced radar cross-section, as well as infrared-signature dampening paint, and a composite-material rotor blade that muffled its acoustic signature. The Comanche could even carry six anti-tank missiles or twelve Stinger anti-aircraft missiles in an internal bay for stealth and had a remarkable ferry range of 1,200 miles.

But a comparatively slow, ground-skimming “stealth” helicopter remains far more vulnerable than a stealth fighter flying at supersonic speeds at high altitude. Despite the Comanche’s stealth features, the Pentagon doubted its survivability versus modern short-range air defense systems—or even old-fashioned unguided anti-aircraft guns. The Pentagon was already adopting drones to undertake such missions instead.

Eight years and a staggering $18.1-billion later, the FCS remained far from being realized when Defense Secretary Robert Gates finally pulled the plug in 2009.

Many of the Army’s canceled programs were legacies of a different era in national defense strategy. Between 1989 and 2019, the Army went from planning high-intensity ground-warfare with the Soviet Union, to global counterinsurgency and stability operations. Then starting in 2014, the Army switched its emphasis back to preparing for high-intensity conflict. Defense technologies conceived for one security strategy were ill-suited for the other.

This article was first published back in 2019.