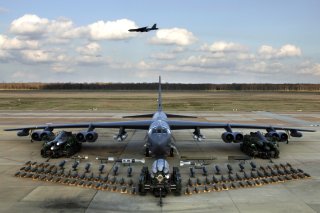 Here's What to Remember: Formation flying is more than a photo-friendly exercise.

A U.S. Navy carrier strike group and U.S. Air Force bombers conducted simulated military strikes near Iran over the weekend, reminding the Persian nation why they should not provoke the United States of America.

In response to Iranian military posturing, the USS Abraham Lincoln Carrier Strike Group launched assets from Carrier Air Wing 7, working in sync with B-52 bombers from the U.S. Air Force.

According to Task and Purpose, the exercises included mock missions, formation flying, and other exercises.

“Our land, air, and maritime assets are even stronger and more effective when integrated together,” Lt. Gen. Joseph Guastella, Combined Forces Air Component Commander, said in a statement. “We are postured to face any threats toward US forces in this region.”

The formation flying, in particular, proved to be a photo-friendly exercise, as USAF B-52s and US Navy F/A-18s are rarely seen in the same place at the same time.

“The training the air wing conducted with the B-52’s today is an incredible demonstration of how our military can rapidly join capabilities to enhance our lethality and our ability to respond to any threat when called upon,” Capt. William Reed, Carrier Air Wing 7 commander, explained.

Other assets have been deployed to the region in response to Iranian aggression in the area, including threats of pulling out of the nuclear deal.