Why Biden Needs to Keep All Nuclear Options on the Table 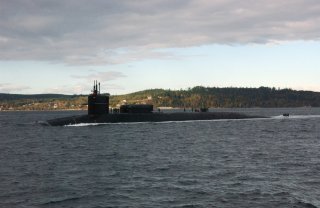 The US Navy’s new low-yield submarine-launched ballistic missile, produced rapidly by the National Nuclear Security Administration, is intended to provide a proportional response to US adversaries’ concepts of ‘coercive, limited nuclear escalation’.

Proposed in the Trump administration’s 2018 nuclear posture review, the SLBM incorporates a variant of the W76-1 warhead called the W76-2 and lowers the explosive yield from 90 kilotons to an estimated 5 kilotons. The missile has been deployed on Ohio-class ballistic missile submarines.

Concern over Russia’s potential to use non-strategic or tactical nuclear weapons against NATO members demands that the US have a response other than high-yield weapons.

Until now, the US’s options were limited. Responding to Russian threats to use low-yield non-strategic nuclear weapons with a 90-kiloton nuclear warhead would be disproportionate and an adversary might well consider it not to be credible. Although the US fields the B61 low-yield gravity bomb and recently developed the B61-12, the aircraft carrying these non-strategic weapons would need to navigate advanced Russian integrated air defences to reach their targets. That raises doubts that high-yield warheads are a viable option.

Credible deterrence that reduces the risk of use of nuclear weapons requires credible responses. The low-yield SLBM is an additional deterrence measure designed to prevent war, not make it more likely.

President Joe Biden has inherited a situation where great-power competition will have significant global consequences and appropriate signalling to potential adversaries is critical for preventing war. During the election campaign, Biden signalled that he believed the deployment of the low-yield SLBM was a ‘bad idea’. He has also publicly supported a ‘no first use’ nuclear policy. A key presidential adviser, Bonnie Jenkins, has also advocated no first use. Jenkins has been nominated as Biden’s undersecretary of state for arms control and international security, which would place her in a strong position to influence this policy.

The increasingly aggressive behaviour of China and Russia, the risk that Iran will develop a nuclear arsenal and North Korea’s possession of intercontinental ballistic missiles make the world more dangerous and volatile. Biden needs to signal that all options are on the table when it comes to defending the US, its allies and its interests and that these options are dynamic, versatile and fit for purpose.

In the face of China’s nuclear modernisation, the US can’t afford to take options off the table and signal a weakness of resolve. In her 2016 book on Chinese nuclear proliferation, Susan Turner Haynes says China is moving away from a minimum deterrence nuclear strategy to one of limited deterrence. Her analysis is based on Chinese military documentation and the quantitative and qualitative modernisation of China’s nuclear structure, which suggests a progression to a warfighting nuclear capability.

The study also casts doubt on the likelihood of China adhering to a true no-first-use policy. Beijing’s long-term commitment to this policy has also been questioned by analysts including retired People’s Liberation Army major general Zhenqiang Pan, who stated: ‘China’s new strategic goal of achieving a most influential world power status by the mid-twenty-first century may envisage a greater role of its military force, including the role of nuclear weapons, and perhaps the need to revisit its no-first-use policy.’

Turner Haynes describes a number of differences between minimum deterrence and limited deterrence, but one distinction goes to the heart of the issue. She says that ‘minimum deterrence is achieved by having the ability to strike back after a first strike’, while ‘limited deterrence is achieved by increasing nuclear options’. For Biden to signal an intention to decrease the US’s nuclear options such as the low-yield SLBM in the face of determined nuclear modernisation by great-power competitors sends a dangerous signal.

His comments may prove to be rhetoric intended to appeal to his base, which includes nuclear abolitionists and the arms-control community, and the president may leave the nuclear policies and structure in place. But the issue is the power of the message.

With a new president signalling that nuclear weapons are not an option, aggressive dictators looking to exploit power vacuums and weakness may conclude that the time is right to push the envelope and invade Taiwan or close the South China Sea, invade the Baltic States or attack South Korea.

US nuclear policies and strategies have helped prevent great-power conflict through appropriate signalling and a robust, evolving nuclear posture. Now is not the time weaken our resolve when bullies are seeking to exploit global fear and hardship and gain an advantage. Let’s not be blindly idealistic to the point of weakening solid defence structures. There’s too much at stake.

Biden needs to signal to potential adversaries that the US has developed and produced flexible options for a reason, and that these options can and will be used proportionally.