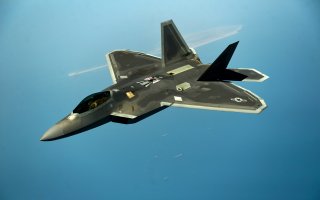 The U.S Air Force has two air superiority fighters in their stable in the F-22 Raptor and F-15 Eagle, but when looking to bolster the fleet with purchases of a new (old) jet for the job, it was the Eagle, not the famed Raptor, to get a second lease on life. That really begs the question: if America can buy new F-15s, a design that’s nearly 50 years old, why isn’t it looking to build new F-22s instead?

By most accounting, the F-22 Raptor remains the most capable air superiority fighter on the planet, with its competition in China’s J-20B beginning to shape up and Russia’s Su-57 still lagging a bit behind. The F-22 really is still at the top of its game… but that doesn’t mean building more actually makes good sense.

While the F-35 Joint Strike Fighter is widely seen as the most technologically advanced fighter in the sky, it was designed as a sort of continuation of the F-16 Fighting Falcon’s multi-purpose architecture, with an emphasis placed on conducting air-to-ground operations. The older F-22 Raptor was intended to serve as a replacement instead for the legendary F-15 Eagle, as the nation’s top-of-the-line dogfighter.

While both the F-22 and F-35 are 5th generation jets that leverage stealth to enable mission accomplishment and both are able to conduct air-to-air and air-to-ground combat operations, they each specialize in a different aspect of air combat and were intended to serve in very different roles. Unlike the F-22, the U.S. continues to receive new F-35s, though comments made by senior defense officials over the past year have placed the Joint Strike Fighter’s future into some question. America will undoubtedly be flying F-35s for decades to come, but it’s beginning to seem less and less likely that the F-35 will replace the F-16 as the Air Force’s workhorse platform.

The Air Force originally intended to purchase 750 F-22s to develop a robust fleet of stealth interceptors for the 21st Century. But as the United States found itself further entrenched in counter-terror and counter-insurgency operations against technologically inferior opponents, the need for advanced dogfighters became far less pressing. With ongoing combat operations in multiple theaters to fund, the F-22 program was shut down in December of 2011 with just 186 fighters delivered. Today, nearly a decade later, the F-22 exists in precious few numbers, despite its fearsome reputation.

Now, the United States faces concerns about its dwindling fleet of F-22 Raptors that were once intended to replace the F-15 outright. Only around 130 of those 186 delivered F-22s were ever operational, and today the number of combat-ready F-22s is likely in the double digits. With no new Raptors to replenish the fleet as older jets age out, each hour an F-22 flies anywhere in the world is now one hour closer to the world’s best dogfighter’s retirement.

The future of the Air Force, as Air Force Chief of Staff Gen. Charles “CQ” Brown has plainly stated, doesn’t include the mighty Raptor. But America needs an air superiority fighter that can stand and swing with the best in the world, and as capable as the F-15EX Eagle II may be, it lacks the stealth it would need to survive an open war with a nation like China or Russia. With the NGAD program still years away from producing an operational fighter, America’s air superiority mission now runs the risk of not having the jets it needs for a high-end fight if one were to break out–as unlikely as that may be.

As simple as just building new F-22s may sound, the truth is, re-starting the F-22 production line would likely cost the same or potentially even more than simply developing an entirely new and potentially better fighter. Lockheed Martin cannibalized a great deal of the F-22’s production infrastructure to support the ongoing production of the F-35, meaning it wouldn’t be as simple as just re-opening the plants that had previously built Raptors.

In fact, Lockheed Martin would have to approach building new F-22s as though it was an entirely new enterprise, which is precisely why the United States didn’t look into purchasing new F-22s rather than the controversial new (old) F-15EX.

Boeing’s new F-15s are considered fourth-generation fighters that are sorely lacking in stealth when compared to advanced fighters like the F-22 and F-35, but the Air Force has agreed to purchase new F-15s at a per-unit price that even exceeds new F-35 orders. Why? There are a number of reasons, but chief among them are operational costs (the F-15 is far cheaper per flight hour than either the F-35 or the F-22), and immediate production capability. Boeing has already been building advanced F-15s for American allies in nations like Qatar and Saudi Arabia, so standing up a new production line for the United States comes with relatively little cost.

The F-22’s production line, on the other hand, hasn’t existed in nearly a decade. In a report submitted to Congress in 2017, it was estimated that restarting F-22 production would cost the United States $50 billion just to procure 194 more fighters. That breaks down to between $206 and $216 million per fighter, as compared to the F-35’s current price of around $80 million per airframe and the F-15EX’s per-unit price of approximately $88 million.

Does that mean it’s impossible to build new F-22s? Of course not. With enough money, anything is possible — but as estimated costs rise, the question becomes: Is it practical? And the answer to that question seems to be an emphatic no. The U.S. Air Force has invested a comparatively tiny $9 billion into its own Next Generation Air Dominance fighter program — aimed at developing a replacement for the F-22 — over the span of six years (2019-2025).

If the new NGAD fighter enters service on schedule, it may even get to fly alongside the F-22 before it heads out to pasture. So, while the Raptor’s reign as king of the skies may soon come to an end, it may not be before America has a new contender for the title.