Why Can't the World Trade Organization Work Remotely during the Coronavirus Pandemic? 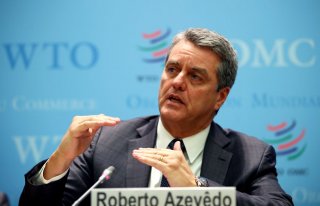 The World Trade Organization (WTO) has recently been under fire. The Trump administration has called for its reform, but to date, its confrontational approach has aggravated allies and gotten in the way of any progress.

Now, amid the COVID-19 pandemic, work at the WTO has ground to a halt, which puts the institution at risk of irrelevance. The only multilateral talks the WTO is conducting, that is, negotiations that include the entire 164 country membership, are on eliminating harmful fisheries subsidies. These talks are now in jeopardy. A key obstacle is an inability to find a way to conduct negotiations remotely. As many of us are now working from home, it is fair to ask why the WTO can’t do so as well?

Last month, the chair of the fisheries talks, Ambassador Santiago Wills of Colombia, was hopeful that negotiations would continue in order to meet the deadline for a deal by this summer’s now cancelled Ministerial Conference. But recent reports suggest that technical difficulties are the heart of the problem. Hannah Monicken from Inside U.S. Trade reported the following:

The chair of the World Trade Organization negotiations to rein in harmful fisheries subsidies has concluded that members are not prepared to commit to virtual negotiations, telling members on Thursday that further work must be put on hold as they wait for pandemic‐​related restrictions to lift.

Colombian WTO Ambassador Santiago Wills, in a communication to members, said he had been receiving questions about next steps, according to a Geneva‐​based trade official. Based on his consultations with members and views presented at the heads‐​of‐​delegations meeting last month, Wills concluded that members were not prepared to engage in virtual and written discussions, he wrote.

Wills decided that the best course of action was to wait and see what comes next, the official said.

The challenge is finding a way to replicate the face‐​to‐​face experience digitally as closely as possible so that these discussions may continue. This is no easy feat, since negotiations consist of countless meetings that happen not just with the entire membership, but also with a subset of countries. Lots of bilateral meetings also take place and are often critical in the last moments of securing a final deal. How to make this work in an age of telework is crucial, because even as restrictions put in place from the pandemic are lifted, it is not likely to be a smooth transition. In addition, if we are hit with a second wave of infections, stopping negotiations again is impractical if fisheries talks are to conclude this year, and worse still for our rapidly depleting fish stocks.

Last month, heads of WTO member delegations met virtually to discuss this problem and noted that while members are generally willing to talk informally through digital platforms, they are reluctant about making binding decisions, as the WTO has no current procedure for this. There are several valid concerns here.

Smaller delegations may rightly fear that they will be cut out of important discussions, there are also technological capacity gaps and security concerns. But finding a solution to these and other problems is not impossible. The United Nations quickly developed an interim decision‐​making procedure last month to allow countries to continue to vote on resolutions. And negotiations between the United Kingdom and the European Union on Brexit have moved online as well.

The WTO should be able to find a way to do this. It should prioritize getting negotiations back on track as soon as possible. As my colleague James Bacchus and I have explained, the fisheries talks are a crucial test case of the WTO’s ability to adapt to the changing realities of the global trading system. Getting these negotiations right is critical, and they won’t conclude unless delegations are willing to buckle down and put in the effort to make a deal.

Last week, Sen. Hawley (R-MO) suggested “abolishing” the WTO, which he followed up with a joint resolution in Congress for the United States to withdraw. Much of what Senator Hawley said about the WTO was factually incorrect and distracts from important conversations about how to make the WTO work better. There remain real challenges that the WTO faces, and the organization is far from perfect. The inability to conduct negotiations online is a key example of this and an area that is ripe for reform. If the WTO wants to survive the pandemic, its negotiating function needs to be brought into the 21st century.

This article by Inu Manak originally appeared in the CATO at Liberty blog in 2020.