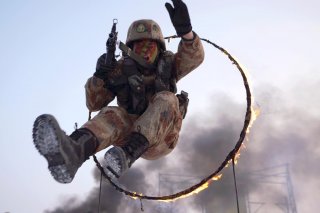 Here’s What You Need to Remember: In 1991, Chinese military officers watched as the United States dismantled the Iraqi Army, a force with more battle experience and somewhat greater technical sophistication than the People’s Liberation Army (PLA). The Americans won with casualties that were trivial by historical standards.

To get a sense of why the Gulf War matters for the PLA, we need to take a quick detour into organizational theory. Armies learn in several different ways; experiments, experience, grafting (taking members from other, similar organizations), vicarious learning and scanning. In 1991, the PLA lacked any relevant experience in modern warfare since the disastrous campaign against Vietnam in 1979. It lacked the funds and the political wherewithal to undertake the kind of large-scale exercises necessary for modern war. Grafting is notoriously difficult for modern military organizations, as it’s become awkward to simply hire sergeants and colonels from foreign countries.

This understanding of the Gulf War helped drive PLA modernization. Especially in air and naval forces, China took immediate steps to update its military technology, generally through purchasing the most-advanced Soviet hardware. Strapped for cash, Russia was eager to make deals and didn’t worry overmuch about the long-range consequences of technology transfer. China also attempted to acquire technology with military applications from Europe, but sanctions associated with the Tiananmen Square massacre hamstrung this effort. Finally, China accelerated efforts to increase the sophistication of research and development in its own military-industrial base.

Still, the Gulf War provided Chinese military and civilian decisionmakers with a ready example of what modern war looked like, and gave some lessons about how to fight (and how not to fight) in the future. The PLA has become a radically more sophisticated organization—with much more effective learning capacity—than it was in 1991. We have yet to see, however, how all the pieces will fall together in real combat.

This article was first published in 2014.