Why China Hit the Pacific with Thousands of Munitions 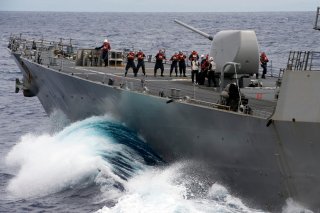 It could be called a massive preparation for attack, a decided and visible effort to intimidate or simply challenge a U.S. Navy ship transit through disputed areas in the South China Sea, but whatever it is called, Chinese warplanes dropped thousands of munitions over the South China Sea in a recent war training exercise.

“Several dozen warplanes participated in the drill, as they penetrated defense lines by skimming the sea at low altitudes, firing rockets and cannon rounds, and dropping aerial bombs on maritime targets,” the Chinese paper stated.

The Chinese paper indicated that People's Liberation Army (PLA) military leaders said the large-scale air attack exercise over the South China Sea was not a specific response to a U.S. Navy Freedom of Navigation Operation wherein a U.S. warship transited within the twelve-mile territorial boundary of island areas claimed by China. The U.S. and many, if not most of its Southeastern allies, believe China’s claim to much island territory in the region is not legitimate.

The U.S. Navy’s USS Curtis Wilbur, a guided-missile destroyer, conducted the U.S. exercise, a regular transit intended to counter China’s claim and express and demonstrate the U.S. right to sail and operate anywhere international military law allows.  The exact circumstances or details of the Wilbur’s Freedom of Navigation transit are not available, but the Chinese paper makes the claim that PLA forces were able to track and monitor the U.S. ship, “warning it away.”  There is no U.S. verification as to whether something similar to this actually happened.

Regardless of the reason why the massive Chinese air weapons drop took place, an ability to fly close to the surface and blanket areas with thousands of precision munitions is likely to get attention at the Pentagon, particularly in littoral island areas of the South China Sea where Marines or shallow-draft vessels could train and operate. However, the Chinese claim that thousands of “precision” weapons were dropped appears to be somewhat of a contradiction in terms.  Any attack using “thousands” of weapons is not likely to bring “precision” to mind, rather it brings up images of carpet bombing or “blanketing” areas with suppressive bombing strikes.

How would the U.S. try to potentially counter such an attack? Of course, any possibility of finding and destroying these fighter bombers before they got close to a target area would likely be the first priority, as perhaps they could be discovered by U.S. aerial drones, ships armed with air and cruise missile defense weapons, or dispersed ground-based radar nodes.  However, should a group of low-flying, heavily armed fighter jets succeed in penetrating the airspace in a vulnerable area such as this, defense would likely be difficult. Unless the U.S. and its allies were able to construct air defenses small and mobile enough to operate on small strips of island land.

This kind of strategic emphasis on island hopping and amphibious warfare actually provides the conceptual foundation for the U.S. Navy’s developing Light Amphibious Warship platform intended to transport Marines and weapons from ship to shore across littoral, coastal, and island areas. As part of this strategic approach, the Marines are now developing a transportable land variant of its ship launched over-the-horizon Naval Strike Missile made by Raytheon and Kongsberg.