Why the Colt M1911A1 Remains a Legendary Pistol 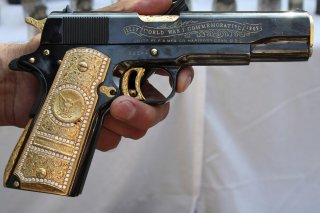 Here's What You Need to Remember: Although the 1911A1 has been phased out of regular U.S. military service, pockets of 1911s still persist. In 2014, the Marine Corps placed an order for twelve thousand Close Quarter Battle Pistols (M45A1). The M45A1 is a 1911A1 built by Colt Defense with modifications, including a Picatinny accessory rail, night sights, and a desert-tan paint job. The pistols were distributed both to U.S. Marine Corps Forces Special Operations Command (MARSOC) and special-operations-capable Marine Expeditionary Units.

The 1911 semiautomatic pistol was invented by John Moses Browning, one of the most successful—and some would say, legendary—inventors of firearms who ever lived. Between 1879 and 1926 the prolific Browning invented some of the most successful firearms ever made, including the 1911 pistol, the Browning Hi-Power pistol, the Browning Automatic Rifle, and the M2 Browning heavy machine gun. Invented in 1921, the M2 still serves as the standard heavy machine gun of the U.S. armed forces.

After the war, the1911 experienced a series of modifications designed to make the pistol easier to shoot. The new pistol was designated 1911A1 and changes included scalloping of the trigger housing, a longer safety spur and wider sights. The interwar period also saw the handgun popular with celebrity gangsters of the time—notorious bank robber John Dillinger carried a 1911A1 modified into a machine pistol by a San Antonio-based gunsmith. Outfitted with a barrel compensator and a grooved foregrip, the so-called Lebman Machine Pistol could shoot a thousand rounds a minute.

Kyle Mizokami is a defense and national-security writer based in San Francisco who has appeared in the Diplomat, Foreign Policy, War is Boring and the Daily Beast. In 2009, he cofounded the defense and security blog Japan Security Watch. You can follow him on Twitter: @KyleMizokami

This article originally appeared in January of last year.