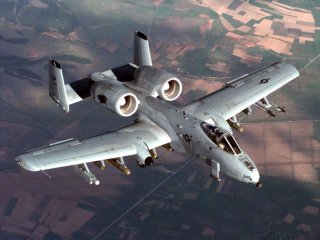 Here's What You Need to Remember: The Warthog is showing its age in 2021 but has so far survived the Air Force’s multiple attempts to retire it. On the heels of continued resistance by Congress, the Air Force has opted to give the Warthog a further lease on life while seeking budget cuts elsewhere—as of the time of writing, mass-retirement is all but off the table.

The A-10 Thunderbolt II is a unique, and remarkably long-lived, war machine that continues to offer impressive combat performance despite its years.

In the decades following the end of World War II, western demand for close-air-support (CAS) aircraft—that is, armored strike fighters that carry out attack missions in conjunction with friendly units—dropped precipitously. Instead, the Air Force turned its attention to long-range fighters and nuclear-capable bombers. The Soviet Union, by contrast, continued to place heavy emphasis on its ground forces, producing the Su-25 Grach “flying tank” that went on to enjoy a storied service history with the Soviet occupation of Afghanistan. Then came the Vietnam War. The Air Force found that its deployed fighters flew slightly too high, and too fast, to serve a meaningful CAS role over the densely forested Vietnamese terrain. The Vietnam years prompted the Army’s renewed interest in attack helicopters; the Air Force, meanwhile, began to layout plans for a new CAS platform.

The A-10 Warthog emerged from a long and contentious procurement competition involving as many as six candidates; of these, only Northrop and Fairchild Republic were tapped to submit prototype models. Northrop’s Ya-9 subsequently fell out of consideration, leaving just the Fairchild YA-10. Following a few subtle adjustments to the design, the Warthog entered serial production in 1976.

The Warthog is a single-seat, straight wing plane, powered by two TF34-GE-100 turbofan engines. The high-mounted engines allow the Warthog to land in exceedingly difficult terrain. “I’ve seen this airplane land on a desert strip with the main gear buried in a foot of sand. On most planes, this would have ripped the gear up, but the Warthog turned right around and took off,” said former Warthog pilot Lt. Col. Ryan Haden in an interview with Scout Warrior. As with its Su-25 counterpart, the Warthog is remarkably durable. The bulletproof bubble canopy is designed to protect the pilot while preserving battlefield awareness, and intentional structural redundancies allow the Warthog to absorb hits from projectiles of up to twenty-three-millimeter. The hydraulic flight systems are not only double-redundant but backed by a manual system.

But armor is only a means to a very specific end: delivering a staggering degree of firepower. The Warthog is, in many ways, designed around its guns. A nose-mounted, thirty-millimeter GAU-8 Avenger gatling gun is the star of the show, capable of wreaking havoc even on main battle tanks (MBTs) with its specialized armor-piercing rounds. The Warthog can also carry as many as six AGM-65 Maverick air-to-ground missiles, as well as a robust selection of guided and unguided bombs. The Warthog’s vast destructive potential was laid bare during Operation Desert Storm, where it racked up nine hundred Iraqi tank kills, in addition to thousands of other military vehicles and artillery pieces. Dozens of Warthogs went on to serve in the Iraq and Afghanistan Wars, with more recent deployments including the Libyan intervention and anti-ISIS operations in Syria and parts of Iraq.

The Warthog is showing its age in 2021 but has so far survived the Air Force’s multiple attempts to retire it. On the heels of continued resistance by Congress, the Air Force has opted to give the Warthog a further lease on life while seeking budget cuts elsewhere—as of the time of writing, mass-retirement is all but off the table. Instead, the Air Force is planning a wide range of datalink, radar, sensor, and armament upgrades to sustain the Warthog into the coming decades.

The Next A-10 Warthog: An Armed to the Teeth 'Flying Coke Can'?