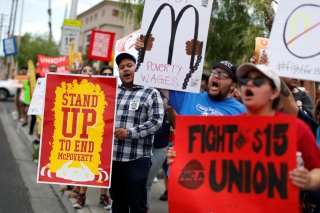 Even if you believe Janet Yellen’s recent testimony that a $15 federal minimum wage would have a “very minimal” impact on overall employment, it is hard to imagine that raising the federal minimum wage from $7.25 to $15 an hour would not significantly impact business costs and employment in at least some parts of the country. But which parts, and by how much? I use publically available data to provide a rough answer to this important question.

Under the Occupational Employment Statistics program, the US Bureau of Labor Statistics (BLS) surveys employers to collect compensation data on roughly 800 specific job categories each year. My impact measure, described below in detail, uses data from the BLS state-level survey results.

Using BLS data, each state is assigned an impact score. The score indicates how a $15/hour minimum wage would affect state labor costs compared to the average labor cost impact nationally. States with index values greater than 1.0 can be expected to face labor cost adjustments that exceed the national average whereas states with index values less than 1.0 will face lower adjustment costs than the national average. The BLS survey only covers non-farm occupations, so in states where employment is heavily tilted toward agriculture, the impact score may be slightly less accurate.

Historical data does not definitively reveal how businesses will react to an increase in the minimum wage. Some studies find that an increase in minimum wage increases the hourly wage for those working, but it tends to cut the overall pay of covered workers through diminished hours and a reduction in employees. There is little doubt that raising the minimum wage increases the cost of labor and creates incentives to adopt technologies that replace human workers with machines or labor extracted from customers. An example of the latter is the proliferation of self-checkouts in high-cost labor markets.

State impact scores are reported in the accompanying national map, where states are color-coded to identify the political party that carried the state in the 2020 presidential election. The map shows that the majority of red states will experience an above-average impact from a $15/hour national minimum wage. Most blue states already have high labor costs, so the increase in the minimum wage increase will impact a much smaller share of workers. Regardless of the overall employment impact of a $15/hour national minimum wage, these impact scores suggest that such a large increase in the federal minimum wage will shift business formation, growth, and employment from red states to blue, as the higher minimum wage erodes red states’ labor cost advantage in many job categories.

To estimate the number of jobs impacted by a $15 national minimum wage, I identify specific job categories in a state where the median wage is less than $15/hour. Half of the workers in this job category earn a wage less than the median wage estimate, and half earn more, so I am identifying job categories where at least half of the workers in that state and job category would either receive a raise to $15 or more, or faced reduced hours and/or termination if the employer could not afford the additional labor cost.

I calculate the total number of employees in specific job categories with median wages less than $15/hour, and divide that by the total number employed in the state using the aforementioned estimate. I calculate this ratio for all 50 states, Guam, Puerto Rico, and the Virgin Islands. The average ratio across the 50 states and three territories is 32.9 percent. The index value for each state is the state’s ratio divided by the national average ratio. This index gives a rough indication of which states and territories business costs will be relatively more impacted than the average state by a $15 national minimum wage (index values >1.0) and which states will be less impacted (index values <1.0).